Fleckvieh fill the vats in Bavaria 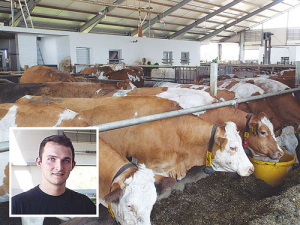 Southern German dairying practice of keeping cows indoors 24/7 makes a convincing argument for getting cows out of winter cold -- or mid-summer heat -- and explaining why more cow barns are springing up in the south of New Zealand.

In July, a Power Farming Euro tour group popped down the road from the Deutz tractor factory in Lauingen to visit the Hermann family farm, 90 minutes north of Munich.

Bavaria’s dairy farmers typically milk about 50 cows, so the Hermann operation, milking 250 cows on 150ha, was large by local standards. Alongside the dairy herd the farm carried the same number of young stock and followers, and crops maize, wheat, barley grass and sugar beet.

First impressions of the shed being over-engineered, with massive support beams, were quelled when the owner explained high snowfall is normal in winter; the building is designed to withstand a 30cm loading.

The Fleckvieh cows, a dual-purpose breed not unlike Simmental, are large-frame cows. The herd averages 9500kg/cow (about 790kgMS), yielding Euro 0.31/L based on butterfat of 4.1%.

The milk is sent to a factory about 20km away.

Cows are milked automatically by three Lely Astronaut robotic units, allowing staff to attend to the field work except for lifting sugar beet which is done by a contractor.

Feeding was by a self-propelled diet feeder, the mix comprising maize silage, barley grass, meal and molasses for a targeted intake of 14-16kgDM/cow/day.

Young stock were being raised in an equally impressive open-span building, built in 2016, divided into single calf rearing pens, before animals were grouped in larger pens in mobs of 15 to 20 cattle.

Males were sold for beef at about 250kg, and females retained as dairy herd replacements, any excess being grown for about 15 months then sold for breeding.

Renewable energy was high on the Hermann agenda, as on other farms. Their buildings carry vast arrays of solar panels, the larger dairy building generating 460kWh, the smaller rearing shed 80kWh, with the output sold to the local supply company, paid for at a subsidised rate.

Basti Hermann said the German farming model, supported by European Union subsidy, has a marked effect on the regional economy. Its mostly small family farms would struggle to survive if they were not subsidised.

The Kiwi visitors saw a quiet, calm and contented herd managed to high standards, resulting in production levels nearly twice the NZ average; the system could work in some of NZ’s colder climes.

• Mark Daniel travelled to Germany as a guest of Power Farming Group.