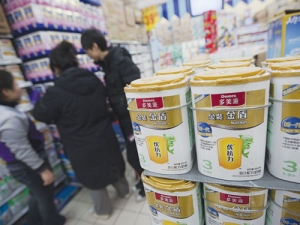 The world’s second largest dairy player says sales of Dumex infant formula has failed to reach pre-2013 levels; it has decided to sell the business to Chinese processor Yashili.

Announcing its 2015 half year results last month, Danone revealed it had struck a preliminary deal to sell Dumex to local partner Yashili International Holdings Ltd and would take a $663 million impairment charge that limited profit growth in the first half.

Danone will use proceeds from the sale, expected to close by year-end, to deepen ties with one of the country’s biggest dairy firms, raising its 9.9% stake in China Mengniu Dairy Co Ltd, Yashili’s indirect parent, by around 2%.

The company says it remains on track to achieve its full-year goals despite a still difficult global economic climate and weak sales of Dumex infant formula.

Its core dairy division is however grappling with weak consumer spending in Europe and Russia; Danone expects the division to stabilise its sales by the end of 2015.

In China, which contributes 7% of group sales, Danone continued to benefit in the first-half from Chinese imports of western European infant milk formula and strong online sales. This is because Chinese consumers are buying more foreign-made infant formula due to concerns over the safety of locally produced baby food following health scares.

Danone, which competes globally with Nestle and Unilever, has been rebuilding its position in China after an infant formula product recall in Asia in 2013. It is also battling Fonterra over compensation relating to the recall.

Sales in its early life nutrition business were up, the company says.

“In the Chinese market, the division is seeing a boom in online sales and our Aptamil and Nutrilon brands, generating double-digit growth for European sales.

“Despite this… Dumex brand products remained well below levels of early 2013, hit hard by the false alert raised by Fonterra and by the shift in consumer preferences from supermarkets to online sales and specialised distribution.

“Danone has decided to reallocate resources in this market, and subsequently to revise downward long-term sales projections for Dumex in China.”

Danone chief executive Emmanuel Faber says in China it is strengthening the Early Life Nutrition business, building on the success of its international brands and reinforcing partnerships with Mengniu and Yashili.

The last day of an agricultural show which saw more than half a million visitors had to be cancelled due to Covid-19.

From New Zealand to France

New Zealanders Graeme and Julie Bott have created a successful wine estate in one of France’s most famous wine regions.