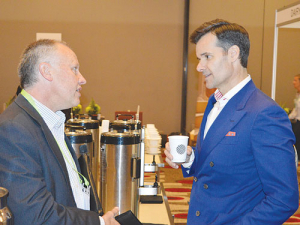 Canadian processor Saputo, on the verge of becoming Australia’s largest dairy player, looked at investing in New Zealand 16 years ago.

Saputo chairman Lino Saputo Junior told the recent Australian Dairy Conference that three countries had appealed to the company when it looked at  the international market: Australia, NZ and Argentina.

Today Saputo is one of the top three dairy processors in Argentina; if the listed Canadian company gets regulatory clearance to buy troubled Australian co-op Murray Goulburn, it will leapfrog Fonterra to become the largest processor in Australia.

Saputo Junior says unfortunately the NZ dairy industry was back then controlled 95% by Fonterra.

“We thought that might not be the best platform for us,” he told the conference.

But Saputo Junior and his father -- retired board chairman Lino Saputo -- visited Australia in 2002 and “fell in love” with the assets of Warrnambool Cheese and Butter Company (WCB).

However, WCB said they were not for sale and the Saputos turned their attention to Argentina, in 2003 making their first purchase outside North America; they bought Argentina’s third-largest processor Molfino Hermanos S.A.

But Saputo Junior says his company never lost sight of how important Australia could be in developing and serving Saputo’s growing international customers.

In 2013 an opportunity arose when listed Australian processor Bega Cheese made a hostile bid for WCB.

The Saputos returned to WCB and renewed their offer to buy the company; by 2013 they had staved off Bega’s bid and became majority shareholders in WCB; last year they bought all the remaining shares in WCB.

Saputo Junior then outlined why his company has invested large in Australia. Notably, milksolids from Australia are held in high regard by international customers, he says.

“Every single market, without fail, would compare [the quality of our solids] with that of solids from Australia, which has a reputation for high quality… The heritage and lineage are here… fifth- and sixth-generation farmers who know the industry extremely well. Australia is a key dairy producing country; the infrastructure was here [and we would not have had to] develop infrastructure to collect and process milk here.”

Australia’s ability to supply the international market was also a factor. Saputo Junior notes that 40 - 50% of Australian dairy products are exported.

“There are not enough consumers here for the total production; regulations here are also favourable. So Australia became‑ an important pathway for Saputo.”

Saputo pays $1.9b for Dairy Crest

The growth of Australia’s dairy industry is now down to the two main players Fonterra and Saputo, says dairy analyst Steve Spencer.

Australia's new dairy kingpin is urging co-ops in Europe and New Zealand to rein in milk production and help stamp out price volatility.