Strange days for US dairy 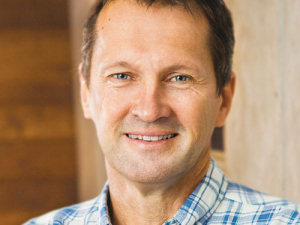 The US dairy industry is now facing a challenging, unpredictable future under Trump.

We've been in the US recently, at the annual American Dairy Products Institute (ADPI) conference, a big event for processors, traders, brokers and buyers in the US domestic and global industry.

The conference has market and technical content, but most of the activity is one-to-one business meetings off to the side. The conference proceedings are a sideshow.

The environment for the US dairy industry is now at least uncertain and the sentiment is highly variable. The ‘windy city’ is named for the vagaries of its climate and also for the bluster of its politicians, so it’s apt now to be pondering the future of the US dairy industry.

The US dairy industry is facing a few challenges, but the extra layers of complexity brought by Donald Trump’s presidency is adding to the uncertainty.

Dairy farmers in the US are in the fourth consecutive year of poor farm margins, and 2018 looks to be the worst of those. Yet milk production keeps growing.

For much of the past year, milk output has grown faster than domestic demand for dairy products, mainly because the fast food market has slowed. The irony is that as the economy has improved, people have tended to ‘trade up’, eating fewer fast-food (i.e. dairy-filled) meals.

Fluid milk consumption keeps sliding because of the onslaught of alternatives and rising consumer concerns about hormones in milk and the environmental impacts of livestock. As US milk production rises and the domestic market falters, exporting is the obvious answer – right?

While the US has tried to step up dairy trade,  the global market hasn’t grown at all in the past year. Despite a stronger world economy, some key markets for dairy are much weaker: the Middle East, North Africa and the oil economies of Russia, Africa and South America are collectively buying far less than in recent years. The outcome has been weaker prices for cheese and butter, flowing back as lower milk prices.

Luckily feed grain and oilseed markets are in a glut, keeping feed input costs to dairy farmers steady. The situation could have been far worse.

Now add the complexity of the Trump administration, which affects not only the future health of the economy, but trade policy on several fronts and continued access to farm labour supply.

The trade policy calls by Trump have been jaw-dropping for the dairy sector let alone the rest of agriculture.

At a time when China has proven to be a key balancing market for global dairy trade, Trump picks a fight over imports to the US from China of steel and aluminium, which has escalated into tit-for-tat retaliation designed, from the Chinese perspective, to hurt Trump’s support base – factory workers and farmers.

The scrap hasn’t directly impacted dairy trade but that step may come next.

Trump pulled out of the Pacific Rim free trade bloc (the TPP), which improves access to a number of ASEAN countries and Japan, but now seemingly wants back into the tent – or not, depending on the day.

The NAFTA agreement presently includes open trade with Mexico, the most important export market for US milk powder and cheese. The main gripe of the US industry – echoed by Trump’s team – is Canada’s restrictive tariffs and internal supply management.

While it has been recently reported that a revamped NAFTA is close to being finalised, Canada has not backed down from maintaining key components of its arrangements. Ironically the TPP (under the Obama administration) was formerly seen as a mechanism to modernise NAFTA, but Trump has been keen to trash “anything Obama did” and out went that strategy.

The protectionist stance of Trump’s administration has weakened the competitive position of the US in trade; key competitors such as the EU have worked on improving market access through FTAs, including an agreement recently reached with Mexico and an FTA deal with Japan which is still a major cheese market.

Meanwhile busloads of immigrant farm workers have been rounded up and removed from dairy farms over the past year. This has reduced the farm labour supply and increased farm costs in the major South-West and Mid-West regions of the US industry.

Mostly Republican in their outlook, many Trump’s supporters in agriculture could be experiencing some buyers’ remorse.

While the US dairy industry has been poised to take a more strategic approach to global markets for some years, it is now swimming against a rising and unpredictable protectionist tide.

• Steve Spencer is a director of Freshagenda, a Victoria-based food consultancy.

Kiwi farmers are not the only ones nervous about their future as a result of politicians throwing them under the harvester.

With the US dairy industry now it in its fifth year of low prices and third year of trade wounds, president and CEO of the National Milk Producers Federation in the US, Jim Mulhern looks at what could come next.

The US Government is rolling out US$12 billion worth of aid to farmers caught up in trade wars, triggered by President Donald Trump.

Plenty's been said about the first 100 days of the Trump presidency – more about unfulfilled campaign promises than tangible action – but in recent weeks the dairy industry has been drawn into some of the posturing.