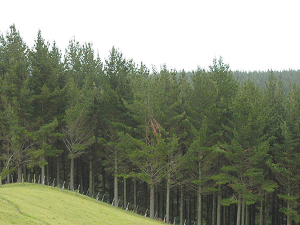 Government projections show exotic forestry increasing by 25 to 30% over the next 15 years.

Farming groups such as Beef + Lamb NZ and Federated Farmers warn that recent amendments to climate change legislation will only lead to more planting of pine trees on sheep and beef farms. They point out how a rising carbon price creates an incentive for speculators to buy up farms and plant trees, with no intention of ever harvesting them – known as carbon farming.

Beef + Lamb NZ raised concerns about a lack of safeguards in the legislation to limit the amount of offsetting that could take place under the emissions trading scheme (ETS). It wanted explicit limits to be placed on carbon farming through the ETS for offsetting to protect the sector, which represented about 92,000 jobs.

It claims about 70,000 hectares of productive sheep and beef land had been converted to forestry since 2019, and that for every thousand hectares sheep and beef farming created about 7.5 jobs, whereas in forestry it was more like 2.5 jobs and around 0.5 for carbon farming. Rural schools, social services, clubs and communities around NZ will be gutted if something does not change.

The irony is that while planting trees may soak up carbon, it does nothing to change the behaviours of the companies producing more and more carbon. An example is Dryland Carbon – owned by Air NZ, Contact Energy, Genesis Energy and Z Energy – which is buying up farmland and planting it in trees to secure carbon credits to meet the carbon liabilities of these four companies under the ETS.

Government projections show sheep and beef farmland decreasing by nearly 20% over the next 15 years, and exotic forestry increasing by 25 to 30% over the same period. This could even be higher when the carbon price increases.

Agriculture Minister Damien O’Connor and Forestry Minister Shane Jones appear to have their heads in the sand on this issue. O’Connor disputes the B+LNZ figures and claims only 22,000 ha of farmland was planted in forestry last year. One would have to treat the current administration’s knowledge of figures with a large grain of salt – considering the botch up it is making of managing quarantine numbers.

It’s time those in power took note of the crisis facing our rural communities before NZ’s landscape – and rural heartland – is changed for the worse.

Sheep and beef farmer confidence dropped to the lowest recorded level since August 2017, according to a survey by Beef + Lamb New Zealand (B+LNZ).