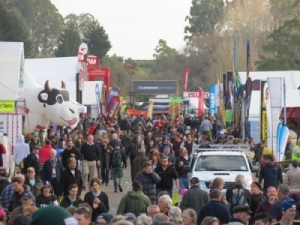 Predictably dairy farmers attended in droves and not all were just looking – many were buying.

The basic reason for Fieldays hasn't changed in its nearly 50 year history: getting willing buyers in front of enthusiastic sellers and enticing them with the hint of a bargain or two.

In the 'old days' the Ruakura farmers' conference, with its amazing science presentations, preceded the Fieldays. Sadly today one wonders how many farmers know anything about Ruakura and how it shaped NZ farming with its useful and practical science. AgResearch now has only an inside site in the exhibition pavillion.

Much has changed at Mystery Creek site, much for the better. The massive pavillion is a great exhibition area, the sites are well laid out and the connecting lanes and roads are smooth paved.

While there is no standout farmers' conference, more and more seminars and functions are run on the site. KPMG's Agribusiness Agenda breakfast is insightful and brilliant. MPI turned on a good show this year as did other exhibitors and the Fieldays Society itself.

Noticeable to old hands at Fieldays was the swarm of 'suits' – bureaucrats, bankers and bosses -- mixing freely with the Red Band brigade of farmers and people who routinely muddy their boots. Agribusiness was there in style and making its presence felt.

Predictably dairy farmers attended in droves and not all were just looking – many were buying.

And the socialising and networking were great.

Fieldays is now 'the' place to be: look at the press of politicians – blue, black and red. Predictably the Nats were there in force: Nathan Guy spent the week there and we saw cameo appearances by John Key, Bill English, Steven Joyce and Paula Bennett. We may have missed Peter Dunne, the Maori party and the Greens.

Fonterra, Zespri, DairyNZ, AgResearch and other sites did well outreaching to their constituents and deserve a clap for having senior staff on site.

The careers hub – new and a great idea – probably needs to look more exciting and relevant to young people.

By far the worst site was Worksafe NZ: boring, unimaginative and, bluntly, a waste of space. Someone should be fired for this hopeless effort: a lost opportunity, money wasted and no attempt to attract 'customers'.

Fieldays was buzzing with people interacting, exhibitors selling and money changing hands. Even journalists were happy.