Give farming a fair hearing 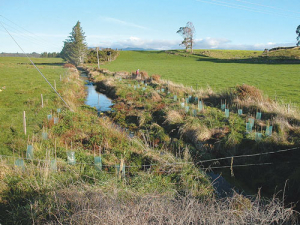 Riparian planting and fencing around waterway keep stock and pollutants out.

OPINION: Many groups out there, large and small, seem to believe farming is the root of all evil to the environment.

They talk about intensive agriculture and pastoral farming being emitters of methane, farming in prestigious landscapes, adding to carbon dioxide, polluting the water ways, etc as if these were the only sources of pollution.

The agricultural industries are the first to admit that they affect the environment, but it is not all bad and they have taken huge steps to mitigate the detrimental effects of their activities on the environment.

We all affect the environment as a result of our civilised way of living. For centuries man has always tended to locate towns and cities close to waterways for supply of drinking water and transportation. As a result man has also used the adjacent waterways as a convenient means of disposing of his waste; only in the last century or so have we begun to treat waste before it enters waterways.

Most towns and cities still dispose of their stormwater and treated effluent by pouring it into the nearest waterway or into the ocean.

In the light of the above the agricultural industries are asking for a fair go.

Have these critics looked at what agriculture has done for this country and what has already been done to mitigate the effects of agricultural operations? And have they noted the millions of dollars farmers have spent already and are still spending to mitigate these effects?

We saw farmers 25 years ago acknowledging that water quality was an issue and starting to address the problem then. They addressed many current issues like keeping stock out of waterways, sediment control, fencing, tree planting, building wetlands, etc.

By planting forests, woodlots and individual trees farmers have helped stabilise hillsides and stop erosion which reduces sediment going into streams and provides shade for stock.

The amount of fencing done to keep stock out of waterways is huge and has helped improve water quality.

Riparian planting is helping keep the invertebrates in these streams. Many farmers have fenced off native bush, wet sumps and wetlands and even built new wetlands to help treat the runoff from their farms.

The unintended consequence of these actions is that farmers have been doing their bit for climate change in tree planting and protecting native bush and wetlands without the bureaucracy telling them what they need to do.

Many critics seem to have preconceived ideas about what farming hasn’t done to protect the environment, and sometimes make statements that have little basis in fact; and they ask for money to fight the agricultural sector.

They seem to have forgotten, or conveniently ignore, that the agricultural industries provide the bulk of New Zealand’s overseas income and most of the local population’s food.

When these groups have had their way and stopped the pastoral farming in NZ, where are they going to get the food to feed the nation or the income to pay bills? Maybe they are going to turn to support the production of genetically modified food grown in laboratories.

If we are to carry on living as at present, then what is needed is a balanced viewpoint based on reality that allows for the way forward to be sustainable and environment-friendly.

Farmers do not deny they affect the environment, but as a key contributor to the food chain and the national economy, and having already voluntarily taken many mitigation measures, they are merely asking for a fair go.

But they will expect the rules imposed on them to apply equally to other sectors of our society.

• Andy Loader is co-chairman of the Primary Land Users Group

Te Papa has responded to farmer criticism of its exhibition on water quality.