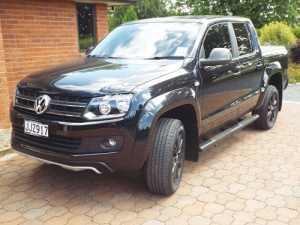 Utes or pick-ups, as they are known in the northern hemisphere, don't have the following they have in these southern climes...

So it's interesting to see a famous European badge appear in the NZ top ten sales league.

The VW Amarok has a following, probably on the state highways, but this reviewer believes it could certainly cut the mustard in the backblocks, as it is rather good and a testament to the VW design engineers who have thought outside the square.

First point of difference is the 2.0L, 4-cylinder engine that seems to lack in cubic capacity but uses common rail and twin turbos to bang out 132kW power and a very agreeable 420Nm torque, sups a light 7.4L of go-juice per 100km, so should be good for a 1000km on a tankful?
Keeping things German, the lusty lump mates with a ZF, 8-speed auto box as smooth as a block of Whittakers dark chocolate, and sliding imperceptibly between ratios without any fuss. Control extends to a choice of Eco Mode, Sport Mode or Tiptronic depending on which side or whose bed you got out of, whilst the fulltime 4WD – 4 Motion in VW speak – uses a central Torsen mechanical diff to deliver power to back or front dependent on conditions.
Safety is always a consideration and the Amarok isn't light in this area either. Electronic Stability Programme (ESP) keeps everything straight and level, Electronic Diff Lock (EDL) delivers power to where it's needed, and a Trailer Stability Programme uses the vehicles ABS system to counter any sphincter worrying moments when a loaded trailer develops a mind of its own.

This is further supplemented by a Hill Hold Assist feature that keeps the brakes on for around two seconds as the throttle is applied, and a hillside descent function that is driver selected, automatically applying the brakes to maintain constant downhill speed.

Out on the black stuff, the Amarok is very quiet compared to its contemporaries, no doubt aided by the 8-speed box, and the ride, although not quite car-like, is pretty close, bearing in mind that this is a one tonne lugger and a three tonne puller and definitely better than the pack. This is probably due to the leaf springs sitting 'outside' the chassis rails, lower deck height and longer springs giving a softer ride because of greater articulation. The spring arrangement also gives rise to the maker's boast about the size of the load area in this double cab: between the inner rear wheel arches you can stow a 1.22m pallet.

In the cabin, it's all very nice, with car like features and a hint that everything is screwed together properly and will withstand the rigours thrown at it. The Black Label as reviewed here featured Alcantera trimmed seats, smoke rear lenses and window tints, rather nice 18 inch alloys and useful running boards for vertically challenged drivers.

The move away from the norm also carries through in operation of the vehicle with 12 monthly or 20,000km service intervals, air and fuel filter replacement at 120km, cambelts at 220km and the transmission
and final drive fluids filled for life.

Negatives: the switch for cruise control on top of the indicator stalk, about a big as a pimple and activating a left turn indication every time it is switched on, and a tonneau cover that looks the bizz, but has locking clamps that must have come from a Tonka toy.

In summary, a great vehicle, not least because of the designers' fresh thinking and certainly carrying more kudos than some of the others in the market.