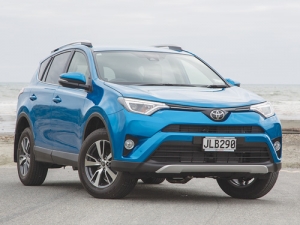 Interestingly, on my first visit to NZ in 2001 my first hire car was a Rav4, picked up at Christchurch for a whistle-stop tour of Canterbury to Southland and back in three days.

Fifteen years later the latest generation Rav4 is a long way from the short dumpy vehicle that reminded me of English girls – short with a wide rear end.

First impression is the size of this SUV: quite large and inside plenty of room, which is a good thing as this Welshman has also got wider and deeper over time. The seats are comfortable and supportive with good side bolsters to stop you slipping around, although the seat back might be a little low for taller pilots.

Entering the vehicle is a breeze as the GXL offers keyless entry and start/stop; so approach the vehicle, leave the key in your pocket, grab the handle and it's open; press the brake pedal and the start button and a lively 2.5L, 4-cyl offering 132kW springs into life.

The six speed automatic works as you'd expect and moves between speeds with little detection and fuss, with manual selection if so chosen.

On the move the car reminds one of an enthusiastic terrier that seeks to please; it has a nice engine note and picks up speed at a lively pace in normal or sport mode. The overriding impression on 50km trips around central Waikato is "that trip didn't take too long", although the spirited driving only ever managed to return around 10L/100km.

Over all types of terrain – smooth state highways to rural farm tracks for a look at the maize harvest – the car coped well, with great traction at all times and plenty of ground clearance irrespective of the conditions.

Equipment levels are as you would expect from Toyota: the dashboard is dominated by two large roundels for speed and engine revs, split by a 4.2 inch colour multi-function display showing trip, driving economy and power split functions.

In the centre console is a 6.1 inch colour touchscreen controlling the high spec audio system, and a rear view camera system with moving grid lines, but lacking the satnav system fitted to the Limited version.

Elsewhere technology abounds in the GXL, in standard features such as auto headlights and windscreen wipers which worked as they should. Upgraded cruise control uses radar to offer an adaptive function and keep a safe distance to the car in front, and to flash up a warning of an impending collision with a vehicle crossing your path. Also, a lane departure warning nudges the steering back on course, and there are blind-spot warnings in the folding rear-view mirrors.

In the rear seats the feeling of space is carried over, and in the rear load space, although there are no 'midget' seats the load space is useful and comes with a security tonneau cover and a multi-purpose cargo net.

The seating upholstery is practical and there is nice detail on the leather covered dashboard and steering wheel, which is contrasted with nice stitching.

From an aesthetics point of view this car in Blue Gem finish is a real bobby dazzler, as they say in NE England. It's not difficult to see why the Rav4 is the most popular SUV in NZ; it looks good, is capable on or off road, is sporty and most of all fun to drive.

Toyota recently celebrated 50 years of operating in New Zealand, marking this by planting a puriri tree at its national customer service centre in Palmerston North.

The NZ native tree was chosen for its longevity and sustainability, reflecting the values of Toyota NZ.

In its early days the company assembled vehicles which arrived from Japan in CKD (completely knocked-down) form at plants in Christchurch and Thames. These included household names such as Corolla, Corona, Hi-Lux, Lite-Ace and Hi-Ace, many of which remain on NZ's roads to this day.

Local assembly ceased in the late 1990s, after the Government removed import tariffs. The business made its Thames premises its vehicle operations centre and all other locations were centralised in Palmerston North.

In the past year TNZ has achieved marker leadership for the 28th consecutive year, selling about 27,000 vehicles such as the Corolla, Hi-Lux and RAV 4.

Chief executive Alistair Davis commented "being market leaders for over half our time in NZ certainly reflects a job well done and is a huge achievement; and the fact that one in four vehicles on NZ roads is a Toyota represents a good 50 years work".