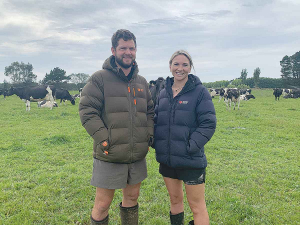 “We’ve always had a strong market for our surplus heifer and beef calves. That’s a huge benefit of farming Holstein Friesians.”

“There’s limited demand for bull calves out of Crossbred and Jersey cows.”

Six years ago, the Moffat’s started using Samen’s overseas genetics over their herd.

“We were quite a high BW (breeding worth) herd, with a big focus on BW. We used a lot of LIC genetics, then switched to using CRV Ambreed sires,” says Ryan.

“But the genetic pool was getting too tight and we wanted to breed a higher-producing, medium-sized Holstein Friesian cow.”

The Moffat’s are aiming for per cow production of 550kgMS.

“We usually rear about 160 replacement heifer calves, selling 40 after weaning. They go to a local buyer or are sold to the export market,” says Billie.

“There’s still a big demand for the heifers. People are starting to look for quality over high BW. We have been really impressed with our Samen calves. Last spring’s calves are probably the best we’ve had.”

The couple is in their second season doing all artificial insemination (AI).

“We use mainly Holstein Friesian sires. In the final four weeks of mating we mix it up a bit and use Angus, Speckled Park, Belgium Blue and Wagyu semen,” says Ryan.

Rising two-year-old heifers, which are at a 185-hectare (effective) runoff owned by Ryan’s parents nearby, are run with Angus bulls.

“Our beef calves have always been highly sought-after. Mum and Dad now buy our beef calves. They take them right through to finishing, where they’re worth around $2,000/head based on current prices,” he says.

“Here in the South Island we get between $100 and $150 for four-day-old calves - significantly more than what a bobby calf is worth.”

The Moffat’s start calving on August 1 and milk through until the end of June.

Tackling the herd’s empty (not in calf) rate, which usually sits between 16-20%, is currently their number one focus.

“Within weeks of calving our cows are producing well over 2 kgMS/day, and they’re peaking at an average of 2.7-2.8 kgMS. That is at a time when we are trying to get them to cycle and get in calf,” he said.

This season, bypass fat has been added to the herd’s in-shed feed ration to help plug the energy gap.

“Bypass fat is high in energy content. It has an ME (metabolisable energy) of 33 per cent. It’s expensive, but so is having empty cows, so we hope it will make a difference to our final in-calf rate,” he says.

“It’s already had a positive impact. The cows had a much higher BCS (body condition score) at mating this year.”

The farm has a modern six-year-old 54-bale rotary milking shed with automated drafting.

Minerals such as magnesium and calcium are added to molasses.

The farm does not have a feed pad. The next big infrastructure project on the horizon is expanding the irrigation system.

“We have one centre pivot that covers 65-hectares. There is a further 13-14ha under k-line irrigation. The remainder of the farm is under flood irrigation which will be converted to pivots over the next four years,” said Ryan.

“That side of the farm is an odd shape, so we might need several smaller pivots.”

The herd will be wintered on just grass and silage for the first time this year. Fodder beet is grown at the runoff for young stock and beef cattle.

The Moffat’s have 313 registered pedigree Holstein Friesians, including young stock, and are keen to grow the number.

The Moffat’s trade under the name Deltop Dairy Limited.

Taranaki farmers will have the opportunity to hear about shifting to autumn calving at DairyNZ’s Farmers’ Forum this week.