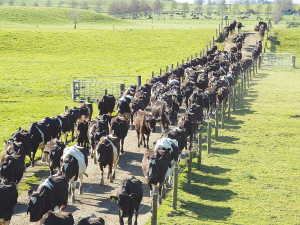 Cows heading back to the milking shed, with no farm bikes, no dogs and no people required.

While the PR machine has been working overtime telling us about Halter and the fledgling company picking a major award up at National Fieldays, up until now, they have been a little reluctant to let people take a closer look.

Dairy News recently got an invite to visit the company’s property near Morrinsville as the system moves into the commercial phase, and it would appear they are onto something very different.

Working on the premise that everything that happens on farm exists to manage the cow, Halter claims to remove the need for fences, gates and even the farm dog, allowing the farmer to manage everything remotely, saving time and importantly improving productivity.

Each cow is fitted with a solar powered collar that in turn is coupled to an application that monitors the cow’s location, physical condition and pasture conditions.

The essence of the system is about “retraining” the cow using Pavlovian conditioning, getting the animal to respond to audible and vibration cues from the collar. The training uses sound to tell a cow where it can’t go, or vibrations for positive reinforcement when she’s heading in the right direction. Behind the scenes, an extensive team has developed patented technology called The Cowgorithim that uses artificial intelligence to control individual cow movements and track wellbeing.

During our visit, Crowhurst demonstrated the ease of use by scheduling the move of the main mob back to the shed for afternoon milking. Bringing up the distant paddock, he set the virtual break to release to after 12 minutes, at which point the cows immediately set off on the walk back to the shed, with no farm bikes, no dogs and no people required.

Looking at the management side, the system removes the need for fence reels, standards or hours of break setting, with the only real need for hard fencing being the farm boundary. Using the app, the user can draw break-lines across a paddock, “fence” awkward shaped areas and create back breaks if required.

Once drawn, the system will then display the size of the area and the amount of dry matter available.

Alternatively, the farmer can dial in the number of cows, target dry matter intake and the paddock to be grazed from where the system will guide the farmer to create the optimum sized break or suggested break size.

Additionally, at the end of milking and the return to the paddock, the first cows can be kept off the fresh grazing until the last cows arrive, meaning all animals get access at the same time.

This is demonstrated quite well in the company’s marketing material, where cows are seen standing at a virtual fence in an open paddock while supplementary baleage is placed on an open paddock. The system can also be used to “virtually fence” no-go areas such as watercourses, ponds or weather-affected areas of the farm. Halter also allows the management of multiple mobs without the corresponding increase in workload.

In turn, the system can automatically draft animals after milking for attention or treatment. Additionally, health alerts to the farmer will allow animals to be drafted individually back to the shed or a notification can be sent to attend to a cow in the paddock.

As the company moves towards commercial rollout over the coming months, three farms in the Waikato running around 700 cows are currently using the system, with plans to add more users and wider geographical availability in 2021.

As part of a commissioning package, a two-person deployment team spends two weeks mapping the farm and attaching the cow collars and, importantly, training the cows to use the system. The farmer does farm walks to determine grass growth profiles, with the frequency reducing as the system algorithms take over.

Commercial manager Steve Crowhurst comments, “in the three and a half years into the journey we’ve not come across a cow we couldn’t train. In fact, they catch on very quickly, often in only three or four days, although sometimes the farmer takes a little longer.”

Ongoing support is available 24/7, while the company is also developing add-ons to complement the current package.

Halter is still a little coy about announcing general pricing, treating each installation on a one-off basis. The hardware (collars) will remain the property of Halter and be leased to users, with additional charges dependent on the add-ons also being used.

In summary, Halter has taken several animal health and monitoring systems and combined then with a sophisticated animal behaviour element, to hold or move animals as individuals, mob or multiples of mobs around the farm.

No fences? No problem

While New Zealand is regarded to be the home of No. 8 wire and electric fencing, it looks like the future of fencing might be virtual.