‘The General’ stamps her authority 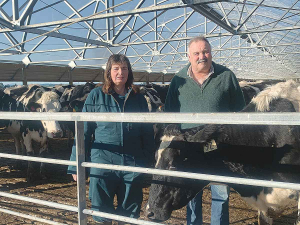 Stephen and Judith Ray on their farm.

A 13-year-old Holstein Friesian dairy cow from Otago has been named the 2020 Valden Cow of the Year.

“Winning this award is probably the highlight of our career breeding Holstein Friesians. We are quietly glowing,” said Judith.

Four of the six cows in this year’s final were bred by the Rays. The coveted competition, which began in 2000, is run by Holstein Friesian NZ. It aims to identify cows that have contributed to the breed on a continual basis.

“We were surprised, but thrilled, to have so many cows in the final. Last year was the first time two of our cows made the top six,” said Judith.

Esonny is the matriarch of the Ray’s high-performing ‘E’ family. She had 20 direct daughters in-milk in the 2019-20 season. One of her daughters Raymac ME Expresso VG87, was one of this year’s Valden Cow of the Year finalists.

“At the start of last season 86 cows, almost 20% of the herd, were Esonny’s descendants,” said Judith.

“We affectionately call her ‘The General’ because of her no-nonsense attitude, but not in a bad way.

“She just eats and gets on with it.”

Three of Esonny’s descendants have been part of a project between Holstein Friesian NZ and genetics company LIC, which is developing top cow families and breeding bulls for use in artificial insemination.

“Esonny has been around for a long time. She has always been an exceptional brood cow and has produced a lot of very good daughters,” said Judith.

Esonny is also the granddam of the 2018 and 2019 Broomfield Heifer Competition winners.

She received a 19 Star Brood Cow Award in 2019. The award is for cows whose progeny gain points based on their daughters’ classification and production, or their sons’ breeding worth (BW) and conformation traits.

Several of Esonny’s progeny have reached the national final of the prestigious HFNZ Semex On Farm Competition.

Esonny has had 12 calves naturally, which included three sets of twins. Her other daughters were born as the result of embryo transfers.

The Ray dairy farm is 175ha eff, producing 233,300 kgMS in the 2019-20 season. They strive to breed a 570kg Holstein Friesian cow which does at least its liveweight in milksolids.

“We try to breed well-proportioned, capacious cows with sound udders. We find they tend to have better longevity,” said Judith.

One of Raymac Holsteins’ other finalists, Raymac Oman Tansy EX2, was named top individual cow in the annual progeny competition run by the HFNZ Otago Branch in 2018.

Setting calves up for future

Successful calf rearing starts at the beginning and getting it right will always be important in setting them up for the future, says calf feeder maker Stallion Ltd.

The better start a calf has in life, the better animal they will be in years to come.

Every change at weaning should be carefully planned and gradually implemented.

The most common cause of scouring is nutritional scours, which happens when there is a change in diet or a diet that is inappropriate for the age group of calves.