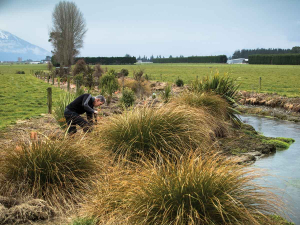 Taranaki ‘people power’ is modelling how all Kiwis should get out there and do stuff, says the regional council.

Said MacLeod, “I am in awe of the fantastic work carried out by our environmental award winners” -- individuals, industry, business, and community organisations.

“They are helping make large-scale improvements to Taranaki’s freshwater health and other ecosystems, contributing to the region’s best freshwater ecological health in 24 years.”

Said Clarkson, “Taranaki is on a trajectory which puts it at the forefront of a more sympathetic and intergenerational approach to land and water management.

Clarkson says Taranaki’s shows how large-scale improvements can be made to freshwater health, wetlands, coastal environments, native plants and wildlife, with restorative work suited to each region’s unique environmental blue-print.

The movement began at least 20 years ago and had gained momentum, restoring the health of landscapes and ecosystems, he said.

“A good number of the sites I documented at the beginning of my career (40 years ago) are now in better condition than previously and many of our native birds have been returned to areas they have been absent from for decades.

“The past 20 years have seen a significant improvement in the protection and enhancement of indigenous ecosystems in Taranaki, partly through changes in law and policy, and partly through the increasing endeavours of farmers and the community in general,” Clarkson said.

Taranaki region has again recorded no rivers or streams deteriorating in ecological health this year; 47 % were improving and 53% showed no obvious trend.

Organic contamination, such as nutrient concentrations, is largely stable: 81% with no obvious trend, 16 % deteriorating, and 3% improving.

TRC chair David MacLeod says the council and others, including NIWA scientists, have found that ecological health is improving even where nitrogen levels are increasing.

“The relationship between nutrient levels and stream health is not as simplistic and straightforward as often suggested, but work is underway to achieve more improvements and fewer declines for organic contamination.”

Taranaki’s riparian planting has seen 5.6 million natives planted along streambanks on private and public land, and 13,756km (87% of ringplain waters) are fenced and regionally-significant wetlands are protected.