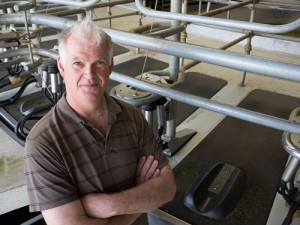 A Waikato farm that bought a prototype 'fibreglass' rotary milking platform in 2010 says the plant has performed to promise and is still "like new".

His family has farmed on Waghorn Road, Manawaru, since Peter's parents settled there in 1970. He bought his parent's farm in 1990 and has since bought neighbouring blocks.

"We wanted to form one property capable of milking 560 cows and decided to build a new 54 bail rotary," Lansdaal says.

"We looked at a range of platforms but top of our list was to go with a manufacturer who had good dealer support in our area.

"Our decision to build a rotary coincided with WMS producing its first composite decks. I was familiar with the concept of Kevlar-reinforced fibreglass for high strength with lightness and I knew the [boatbuilder] who designed and led Waikato's construction team – Josh Janmaat – so I was confident I'd made the right choice.

"Only one composite deck had been built – they were still in the prototype phase – but WMS agreed to replace the fibreglass deck with concrete if I wasn't happy."

Lansdaal milked in the new dairy for four years then handed over to contract milker Antony Loomans as the business grew.

"It hits you how quiet it is. I'd always liked the rubber mats the cows stand on for comfort... and they also contribute to a very quiet milking environment.

"Then there's the low weight: we need only a 1kW motor to turn it.

"We've probably done 2500 milkings over five seasons in this dairy so that's a fair bit of use and by now you'd normally be seeing pitting in a concrete deck from chemicals and effluent.

"The Centrus deck looks as it did on day one. Hosing keeps it clean at each milking and a few times each year we use a hose-off solution to remove algae.

"The wear strip on the rollers also looks near new and the only maintenance required is a monthly grease and oil top-up.

"We've had no issues with the platform, milking system or components and annual service takes only 30 minutes."

Lansdaal says the novelty of the composite platform have prompted many farmers to visit.

"Farmers like to see innovations in operation. It's never been a problem showing this dairy off as it always looks just like it did when it was unpacked – clean."