Out to pasture for first calves at Massey Uni 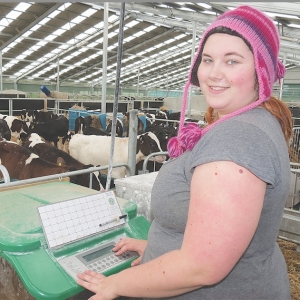 IT’S WEANING time for the first of the calves from the trial at Massey University looking at possible benefits of differing milk diets and machine feeding compared with hand feeding on calf growth rate and subsequent performance of dairy cattle.

The project, which will be running for the next few years and is a long term study being completed for Bell Booth Ltd, Palmerston North, to assess the effect of early life nutrition on subsequent milk yield, cow performance, longevity and farm economics. Its goal is to provide accessible systems-level solutions for profitably increasing pastoral production and reduce herd replacement rates, while farms’ environmental footprint.

But right now Massey Researcher Dr Jean Margerison and her team of student helpers are busy weighing and weaning the 180 heifer calves, which are the progeny of the 650 cows which are part of Massey University agricultural experimental station (MAES), at the number 4 dairy farm. It’s just like any farming operation and Margerison and her team are working seven days a week to get the task completed.

Weighing the calves is an integral part of the research and each week the animals are weighed manually or their weight collected automatically by the calf feeding machine to measure the progress of each calf. As part of the trial, the calves are fed differing amounts of milk and types of milk diet along with 20 % protein meal, pasture hay and fresh clean water up until weaning. Some groups get less milk and tend to eat more meal, while claves offered more milk eat less meal.

“In the early growth phase we want to make sure they are growing quickly because that means that you get more mammary development, healthier calves and they grow more easily while at pasture and subsequently yield more milk and have greater survivability as adults. If they are managed and fed well they get to target weaning weight earlier and they have better chance of having a good first and subsequent grazing season,” says Margerison.

An important facet of successful calf rearing after weaning says Margerison is making sure that there is good quality grass supply, meal and a sheltered aspect for the animals. She says this applies to both indoor and outdoor systems, when claves are turned out to pasture.

“Even during spring the weather can be pretty nasty and when it’s cold and unpleasant then the growth rates are lower so you want good sheltered conditions to make sure they use the milk and meal to grow and that you feed them enough milk during cold conditions to achieve good growth rates on average between birth and weaning of 650 g/d for Jersey to 750 g/d for black and whites.

If the conditions are colder it means that the calves will need more milk or else they will grow slower and not be as healthy. When it’s cold they use more energy from milk to keep warm, then there is less available for them to grow, so in cold years don’t underestimate that need for feeding more milk to young calves not old enough to be eating meal. For example if you normally feed them four litres you should feed them five or six litres a day,” she says

As part of the trial a group of calves are being offered milk on a semi ad-lib basis rather than the normal once or twice a day feeding regime. The feeding machine has a small feeding station which the calves can go into and get their milk feed. They get as much as they want in the first week or so but then they are put into groups and get a pre-determined daily milk feed amount. This is done by using an EID or NAIT tag system which monitors their milk intake. They also get free access to meal, pasture hay and fresh water. What’s especially different says Margerison is that the milk is warmed up and they feed when they want to have their two meals daily, you could set it up to feed more often if you wanted them to be able to do so.

“We have some calves that are fed cold milk and some that are fed milk that’s warmed to 30 degrees, so it feeds stored colostrum or any sort of milk diet you want it to. The fact is calves do better on warm milk, but the issue is that it should be a consistent heat and not over heated and should not fluctuate if you try to do this manually,” she says.

Margerison says the calves fed more milk grow faster and wean earlier – in some cases within eight-and-a-half weeks while calves on other feeding regimes take about nine-and a half weeks and on the standard diet can take up to ten to twelve weeks. However, we have yet to see how well calves wean from higher milk feeding levels. The target weaning weights vary according to breed with approx. 90 kilograms the target for the back and whites, 85 kg for the kiwi cross and around 75 to 80 kg for the Jersey type calves. The main thing is that they can double their birth weight plus about ten percent by weaning time on the system.

In the next few weeks results of the trials will start to show as the calves are transitioned onto pasture and their post weaning weights are monitored. Margerison says they like them to transition from milk onto pasture without live weight loss, but they will see how the higher milk intake calves manage.

“The environment is challenging for calves in the early days and the control of disease and parasites is an important part of heifer rearing. We do vaccinate and feed a minimum of two kilograms of meal for each calf daily, changing to a 16 % protein meal when they are at pasture. We aim to give weaned calves the best quality pastures we can and rotate them around paddocks and use cows to clean off paddocks or top them if needs be. We like to offer them the opportunity to eat some hay when we turn them out and are careful to make sure they eat up the meal which they are used to eating and this helps transition them nicely onto pasture,” she says.

Of the heifer calves reared at Massey will make their way into the main herd as replacements, being mated at 65 % mature weight at 13 to 14 months of age and calving at 85 to 90 % of mature weight at 22 to 23 months of age. The next phase of the trial will assess the effect of calf diet on the production and survival traits of these animals in the milking herd in 2016 onwards.

It’s early days for the heifers in this trial, but the painstaking and detailed work by Margerison, the students and Massey staff involved in this work will hopefully produce some hard data that commercial dairy farmers can utilise in their farming systems soon and in investing in the future of their dairy herds.