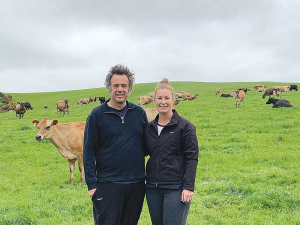 The sight of a largely Jersey herd is less common in the area and the couple say that they are busting the myth that a bigger, blacker cow is needed to be profitable in the south.

Originally from Auckland, Ross got into farming following a chance encounter with an enthusiastic Primary ITO tutor who encouraged him to consider dairying as a career.

Kristy grew up on a farm and the two did a role reversal for a short period while Kristy studied in Auckland and Ross worked his way up the farming ladder in Ngatea. In 2016 the couple moved south to begin their sharemilking career for Dairy Farms NZ Limited.

Five seasons on and they run a relatively low input system on the 274 hectare (235 effective) mixed contour farm, feeding approximately 400kg of palm kernel and grain through in-shed feeding. The herd produces around 380kgMS/ cow and around 1380kgMS/ ha.

Around 20-30% of the herd is milked once-a-day (OAD) in spring and summer with the full herd on OAD from April/May onwards.

“We trade off a small amount of production with our milking regime but we make up for that in cow health, condition and fertility,” says Ross.

The herd is significantly above the industry average for reproductive performance, averaging between 75-82% over the last five seasons. The herd also averages a 7% empty rate from 12 weeks of mating, but it has been as low as 5%. Even more impressive is the fact that no intervention is used to achieve these results.

“That’s one of the main advantages of Jerseys – they are highly fertile,” says Ross. “We have found that by focusing on cow condition and using OAD as a tool to manage lighter cows or non-cyclers, we don’t need any hormonal intervention to achieve strong reproductive performance.”

The couple use 100% Jersey bulls for AB and say that they are selecting their genetics with a bigger framed Jersey in mind. They say, over time they have built up a herd of superior type to the typical Southland cow.

“It’s a combination that gives us the positive traits of a Jersey animal – such as higher milksolids percentage, superior fertility, easy calving, good feet, and mobility – with a little bit of extra size.”

Equity growth has been a big focus for their business and stock sales have helped to drive this.

“We have a real niche in Southland when it comes to Jersey bull calves. There is a strong demand and limited supply in our area so we have been able to capitalise on that,” says Kristy.

The couple also has an abundance of surplus mixed-age stock to sell annually. Rearing 25% young stock, they aim to bring through around 21-22% as in-calf heifers. This, coupled with their lower empty rate, means that there is surplus stock each season.

“Our stock sales have been an important factor in our business growth and it has allowed us to get to our herd goals quicker by selling off the higher Friesian-content animals,” says Kristy.

The couple have a strong focus on cost control and say that for them it is about getting the basics right, while keeping things simple so that they can grow.

It’s a goal that has seen them purchase a 480-cow farm in equity partnership this year. The couple will contract milk the farm and play a management role across both properties.

The couple's longer term vision is to purchase more land and move into full ownership.

The sale of a line of elite, high BW, young Jersey cows and heifers is attracting interest from farmers across the country.