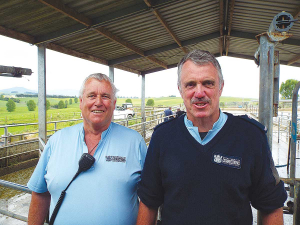 Organised with the support of DairyNZ, the visit included a tour of the rolling 1200ha property, led by manager of industries Stuart Morgan and head of farm operations Pete Watson.

Relying on a system one operation and once-a-day (OAD) milking, two mobs of 800 and 1000 cows are milking through older 40 bail and 60 bail rotaries respectively, achieving 305kgMS per annum. Largely a grass-based operation, with no bought-in supplements, a small area of maize for winter feed and turnips for summer feeding is grown to complement the grass.

In 2019, when the farm ran three dairy mobs, a decision was made to earmark 400 older and lower producing animals to create the foundation stock for a new beef suckler operation, inseminating cows to Hereford sires. Heifer calves from this beef herd will be retained to become future breeding stock, while yearling steers will be moved up to the Springhill facility in North Waikato and fattened to 24 months.

In addition to the farming operations, two horticultural nurseries are also located within the secure area of the prison, producing up to 70,000 trees, shrubs and flaxes per annum, that under the guidance of Premier Rivercare are used for riparian planting projects throughout the farm. Plants are also made available to the Department of Conservation and local councils for local projects.

As part of the day-to-day operations, 19 staff/instructors are actively involved in engaging and training prisoners who show an interest in agriculture. From a prison population of 740, around 30 prisoners are available for farm work, usually with about 10 people out on the farm at any one time.

A nuance of the system means that “workers” don’t start until they are released each morning at 7.00am, meaning milking finishes around 11.00am and they are back inside the secure facilities by 4.00pm.

This restriction prompted the move to OAD milking, but in doing so delivered several benefits. Milk production stayed largely in line with the twice daily format, but cell counts dropped by 25%, alongside a major reduction in incidences of lameness. Additionally, there was a major reduction in leave liability by around $1.2m, giving better conditions for staff and even allowing leave to be taken during the calving season.

Seen as a coveted privilege, to qualify for farm work, inmates must have been “inside” for at least three months, be approved by an advisory panel and show high levels of commitment. As part of their on-farm duties, inmates receive ongoing training towards recognised industry standards from the instructors, with support from local primary ITO’s.

Watson, a stalwart of nearly two decades at the farm, says it is rewarding to see the changes that occur with some of these guys.

“Many will have come from extremely challenging backgrounds, but given a position of trust and responsibility, often for the first time, will take to the experience very positively.

“We often see some of the toughest, streetwise guys, whose “normal” is very different to our own, respond to these new opportunities with appreciation. It might be a task such as rearing calves, but they do so, with a remarkable deal of kindness and care – and woe betide anyone who dares to mess with their animals.”