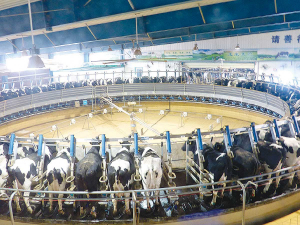 There is high demand for reliable, high performing milking technology as China continues to ramp up its herd sizes and milk production.

The four milking plants will be installed across three farms and collectively they can milk up to 48,000 cows a day.

Each plant has been designed to the same specifications and capable of operating up to 21 hours per day, if required, seven days a week.

Waikato Milking Systems China Manager David Morris says three plants had been installed in 2020, the first was commissioned in July 2020 and the second and third will be commissioned in March 2021.

The fourth will be installed and commissioned late in 2021.

All four plants were designed and made at the Waikato Milking Systems manufacturing plant in Horotiu, north of Hamilton, and exported to China for installation during 2020.

Data compiled by global business data platform Statista show China will have about 6.23 million dairy cows by 2024. It is the fifth largest producer of cow milk in the world, New Zealand is seventh.

Morris says there is high demand for reliable, high performing milking technology as China continued to ramp up its herd sizes and milk production.

All of the plants Waikato Milking Systems exported to China featured heavy duty bail work for handling large numbers of bigger animals, for durability and longevity.

Two of the rotary systems will work side-by-side at New Hope Animal Husbandry’s farm in Ningxia, Northwest of Xian, 1000 kilometres north of Chengdu.

“The farm at Ningxia has about 10,000 animals including dry cows and replacements,” Morris says.

“The farm has two milking herds, each with a maximum of 3000 cows.

“Each of the rotary systems will have throughput of 520 cows/hour, and milking will be three times per day, increasing to four times later on.

The other two Obit rotary plants will be milking cows at New Hope Animal Husbandry’s farms near Jinchang, in the Gansu province, bordering Inner Mongolia to the north of China.

They will operate under a similar programme to the rotary plants at Ningxia, each milking about 520 cows per hour, three times a day moving up to four times a day later on.

“We expect these systems to be operating 16 or 21 hours per day also, depending on how many cows the operator wants to put through.”

Morris says installing the four milking plants had been a challenge because of the extra precautions prompted by Covid-19.

But installation teams in China worked hard and long days to build each of the plants and assemble the components in about three weeks.

“Since 2012 Waikato Milking Systems has installed over 40 cow rotary parlours in China, including 15 which were 80-bail systems and most are now milking four times per day,” David said.

“The market in China is aware of the quality of New Zealand-made dairy products, they know we can make superior milking systems that stand the test of time.”