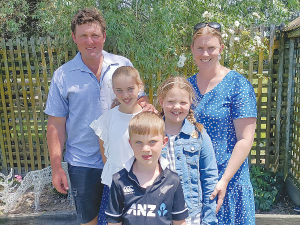 She had only been married to her husband, Arthur, for three months before he was called to serve in World War II. She expected him to be gone for around 12 months; instead, he was gone for five years. Peace was declared while he was making his way home.

But Joy Satherley didn't dwell on the adversities of life. She took her earnings from her work in a milk bar and from hosting dances for returned troops and saved enough to buy a herd of 25 cows.

"We have always been very proud of her for that," Lawrenece says.

When Arthur returned, he was balloted a settlement farm for his service and Joyclas Friesians was born.

Today, Arthur's granddaughter Anna and husband Robbie are at the helm, steering the stud to success once more, with a number of notable cows taking the spotlight.

Arthur purchased his first pedigree Holstein Friesians in 1960, laying the foundation of the 'Joyclas' herd - named for Joy, Christopher, Lawrence, Arthur, and Satherley.

Joyclas has an impressive show record, winning the 1978 Royal with Manganui Achilles Gail EX, and the 1993 Royal Champion female with Joyclas Star Quantas, amongst many other prizes over the years.

At age 17 Lawrence purchased his first farm for $24,000. His parents bought a second farm and the two properties were joined together.

"I went straight into farming, and I still love cows as much as I did then," Lawrence says.

He bought five pedigree cows and supplied the local town milk supply. Although his milk had a very respectable 3.5% fat content, farmers were remunerated on volume - and Holstein Friesian cows delivered the volume.

Lawrence, who has a long history serving both the Holstein Friesian breed and the New Zealand dairy industry, says the breed has many advantages.

"Once you get into Holstein Friesians, that's it," he says. "There is something special about them. And socially, too... we have met so many Holstein Friesian breeders in New Zealand and overseas that would gladly offer us a bed for the night. They are very hospitable."

"We would attend eight shows a year in our area," Lawrence says. "We won every prize there was to be won, I think."

Once Lawrence stepped back from the farm, Rick and Kerry stepped forward. But over time both left to develop their own sheep and beef farms.

During this time, Anna's husband Robbie - a builder by trade - had been considering whether he might want to become a dairy farmer. Lawrence suggested Robbie go farming for two years and if he wanted to continue, they would look at the couple coming home to the farm.

"After two years they were keener than ever," Lawrence says. "They love it, the kids love it, and I'm so proud of what they have achieved."

Robbie wasn't all new to farming. His father was a dairy farmer, although they sold before Robbie was born, and he held school holiday farming jobs. Robbie and Anna attended their first NZ Dairy Event together in 2009 and were blown away by the animals and the camaraderie between farmers.

"That was really the catalyst for us," Robbie says. "I didn't want to get to 40 and have regrets. I worked at Lucky Hollow Stud for two years, just to make sure that was really what I wanted - and it was."

The couple, who have three children - Ella, Isabel and Charlie - moved home in 2014, getting stuck into cow records and registering a few cattle.

"We managed to find a few cows that linked back to Manganui Achilles Gail EX," Robbie says. "We went to sales each year to build a good base to breed from. We've done some ET work as well, to help speed along genetic gain."

Today, Robbie and Anna milk 300 cows on 150ha, plus lease blocks. Around 60 cows are registered Holstein Friesians, and around 60-80 calves are born annually.

Robbie says they have some nice Delaberge Salt and Gen-I-Beq Sammy daughters in the herd, one of which is Joyclas Sammy Moo S3F EX - the overwhelming winner of the 2022 NZ Dairy Event.

Despite Joyclas' excellent show record, the last time the stud won a Champion Holstein title was in 1993.

At the 2022 NZ Dairy Event, Joyclas showed three in-milk cows and one entry in partnership with Semex's Isaac Kelsen.

"Isaac has been a really big part of our success," Robbie says. "His support to get back into showing has been awesome."

They hoped Moo would continue her success of 2021, having won the four-year-old class - but she far exceeded those expectations.

Moo's success belies her humble beginnings: she was chosen by Robbie in 2016 as a calf for the 18-month-old Charlie.

"I chose what I thought was a nice calf for him to look after and jump all over.

To their surprise, Moo classified as Excellent in 2020, and did well in the Holstein Friesian New Zealand-Semex Ltd On-Farm competition. They showed her as a four-year-old, doing well at the Stratford A&P Show.