How farmers can build up carbon in soils 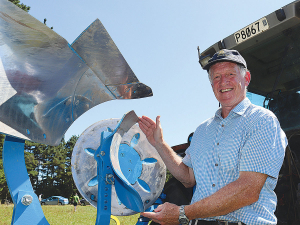 Research to help dairy farmers build up carbon in their soils to offset their farms’ greenhouse gas emissions is underway.

The research is run by Massey University and Plant & Food Research using full inversion tillage to renew pasture. The results so far are promising. Peter Burke reports on a field day at Massey attended by 50 farmers, scientists and rural professionals.

Professor Mike Hedley of Massey University says the research was prompted by a national survey that showed New Zealand pasture soils are nearing the limit of their capacity to store more carbon. ike

The survey showed topsoils rich in carbon, but subsoils devoid of carbon, challenging the researchers to find a way to use subsoil to store more carbon.

Hedley says there are caveats on the research: it is aimed at low to rolling country which can be easily ploughed and which a farmer would normally re-grass over time to improve pasture quality.

Hedley and Dr Mike Beare propose full inversion tillage (ploughing) as a solution. This involves ploughing deeper than normal, bringing the subsoil to the surface and simultaneously burying the topsoil.

“We wanted to see if we could put that topsoil with the carbon deeper where it might decompose slower and create a new opportunity for carbon to be stored in the topsoil,” says Hedley.

Finding a suitable ploughing method led the team to the UK where full inversion tillage has been used to regenerate the growth of heather.

Hedley says the equipment used overseas was a bit over-the-top for what they had in mind so in typical Kiwi style he made his own.

“We looked at a much simpler design that could just be clipped on any of our ploughs: a disc cultivator and a skimmer that would lift the topsoil layer and drop it in the furrow, then the mouldboard would bring the subsoil up.

“The first thing we did was modify an old mouldboard plough that I had at home; it worked.

“Then we imported a new German plough which is what we have today and which is specifically designed to do the job we wanted done.”

The important message to farmers about this project is its direct link to pasture renovation, Hedley says.

The researchers expect a farmer would renovate or re-grass about 10% of their farm each year using full inversion tillage.

Dr Mike Beare, a principal scientist at Plant & Food Research, says allowing more carbon to accumulate in the soils is a key means of offsetting some of the greenhouse gas emissions from pastoral farming.

“If we can accumulate carbon in the soils we can offset some of the carbon losses from other parts of the pastoral farming systems. By burying the carbon from the topsoil at depth, and bringing up subsoil material which is under-saturated with carbon, we can grow new grass on it and accumulate carbon on the new surface and create a new topsoil.”

Referring to full inversion tillage, Beare points out that farmers have been ploughing paddocks for centuries. The researchers have slightly modified their plough to bury organic topsoil deep down.

“We are ploughing to a slightly greater depth than most farmers do now, but not that much.

“There may be benefits in going deeper in some cases but the deeper you go the more energy you will consume in pulling the plough through the soil and that will be a trade-off for the carbon you accumulate.”

Beare says while pasture renewal with full inversion tillage is suitable for dairy farms, it would work equally well for intensive sheep and beef farms and possibly deer on flat or gently rolling land.

Full inversion tillage is ‘a means of buying time’, came a comment at the field day.

“The question is will it decompose right back down to background levels in the subsoil? Evidence from some previous studies suggests that it won’t and that we will retain some of that carbon we bury.

“The next question is how rapidly will the new topsoil accumulate carbon under the new pasture? What we know is that we are buying ourselves time because we are slowing that decomposition and accumulating new carbon at the surface.”

The research involves field trials in the North and South Islands. In the case of the latter, the soils tend to be freer draining which can give slightly different results.

Trials are also running in glasshouses to simulate what happens when soil is inverted by the ploughing process.

“We have built a chamber where we can label the plants with carbon 13 -- a heavy isotope of carbon that allows us to trace the movement of the carbon into the plant and into the soil. By doing these experiments under controlled conditions we can better estimate how much carbon we are accumulating in the soil at depth or in the profile,” Beare says.

The research has been funded for three years by MPI and other partners and is now about half finished. Beare says there would be merit in going further with the work and this will be discussed with the funders.

He says the results so far show that full inversion tillage results in an increase in the production of new pasture and forage crops compared to other conventional pasture renewal practices or non-renewed pasture.

Other research partners are monitoring the work, including Teagasc, in Ireland, responsible for R&D, training and advisory services in the agri-food sector. Beare says Ireland has farming systems similar to ours and the research in NZ may benefit them also.