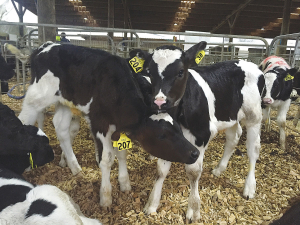 Timing of puberty is emerging as one important measure in a DairyNZ trial.

But faster genetic gain is possible if it was more accurate, so new measures are being tested to achieve greater fertility, he says.

Timing of puberty is emerging as one particularly important measure.

“A faster rate of gain is possible – that is the aim here. We are trying to increase the gain that is possible through fertility and to do that it has to be more accurate,” he told the Northland Dairy Development Trust (NDDT) annual general meeting.

Burke heads a programme with fellow DairyNZ scientists Susanne Meier and Claire Phyn. Its aim is to provide management and genetic solutions to improve cow fertility and lifetime productivity.

They are also working with dozens of scientists, technicians and other experts from research agencies with support from commercial companies, MBIE and more than 2,000 farmers.

Burke told the NDDT meeting that objectives include developing a management technique related to the transition period for the cow which will likely get about 10-15% adoption in the industry – providing fertility benefits for minimal input.

On average the industry is at about 68% of cows getting in calf within the first six weeks of mating. The target is about 75%, so there is room for improvement.

The six-week in-calf rate is made up of two key drivers. The first one is cows getting submitted in the first three weeks and the second one is the cows holding onto those inseminations.

“The interesting thing for me is they run parallel – they are both simultaneously affected. At our level we are trying to work on these key drivers to get the result.”

Burke says if they do nothing, fertility genetics would decrease by default, but a big gain will come if they can accelerate genetic improvement.

A flagship of the programme was to build a cow herd – they call it the fertility research herd or model herd.

In 2013 they contract mated 2,500 Holstein Friesian cows to selected sires aiming to create a future herd with extreme differences in the fertility breeding values. In 2016 about 600 calves were born and they have reared 550 heifers, half with low fertility (Low Fert BV) and half with very high fertility (High Fert BV). They have been raised in the same environment with the same management policies to take out environmental effects.

“We are purely studying for genetic fertility.”

In 2017 these animals calved for the first time and have now just finished the second lactation. About 481 were reared in first lactation and 345 in the second.

They had activity monitors on the animals from a very young age.

“This was probably one of the first cases when this had been done. It is very hard to do that because they are out grazing and not coming into the dairy shed to download the data. So they had the farm set up with receivers all over the place.”

Some of the technicians were virtually camped there. Liveweight gains were the same in both BV groups.

However, timing of puberty was 21 days earlier in the High Fert BV despite being 25kg lighter. Age of puberty in the high line was 358 versus 379 in the low.

Burke says the high fertility animals must have a physiological trigger for puberty which wasn’t necessarily related to liveweight.

Puberty measure could be one key to accelerating genetic gain for fertility.

“That might allow us to predict future cow fertility more accurately at an earlier age.”

They used Jersey bulls with AB across the Holstein Friesian heifers. There was a huge difference in the submission rates – at three weeks, 87% for High Fert BV versus 48% for the low.

“The low rate was not because staff were missing heats – these cows had not started ovulating after six weeks of mating.”

Fifty-five percent of the highs were pregnant in the first three weeks. That was on track for a 78%six-weekk calf rate. Only 33% of the lows were pregnant within six weeks. The empty rate was 42% because they didn’t get pregnant over a12-weekk mating.

In second lactation, 74% of the High Fert BV were in calf by six weeks. The Low Fert BVs were pretty bad - 39% six week in-calf rate, a difference of 29%. And again they lost 44% because they did not get pregnant.

They started with 320 Low-Fert – they only have about 68 left. He says that shows how important fertility is to the farm businesses in terms of having cows staying in the herd and being productive for a least three or four seasons.

“The fertility breeding value is certainly working. With the low line, there are two populations. About half of them will cycle in the first three to six weeks by themselves and the other half won’t. It costs money in your herd through dealing with those sorts of genetics.”

A Canadian study of Friesian cows showed that distance, which is highly variable and moderately heritable, is associated with cow fertility. But an Irish Holstein Friesian population study did not find a correlation between that measure and cow fertility.

But Burke says their study is showing there is certain point where the distance seems to be associated with cow fertility regardless of whether in the low or high fertility line.

With below 105mm in anogenital measure at heifer age, reproductive performance was better than those that had lengths above 105mm.

“This is evidence that supports the Canadian study that there is a correlation. Whether that is the same if you go out to the industry – we will have a look at that.”

The programme is now targeting some measures that might help improve the accuracy of the fertility to get some gains.

About 5,000 dairy heifers in 60 commercial farms are lined up for study.

They will measure progesterone in blood to determine the time of puberty. They put activity monitors on 2,000 heifers. They will follow those through the first lactation so they can correlate the puberty trait or the anogenital trait with how they perform in lactation.

Monitoring has to be accurate, safe, practical and affordable and they will improve on methods for use in the industry, says Burke. That may be activity monitoring.

“If you think about the environment where every cow counts, there might be a time where cows are activity monitored all the time.”

The take home, he says, is that fertility breeding value does work if you pay attention to it.

“Faster genetic gain is possible and we need to measure it more accurately and we are trying to find more ways to measure.”