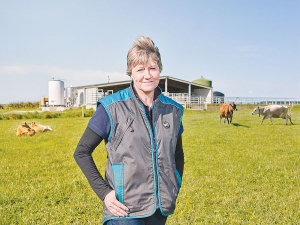 Farmer Joanne Cracks says robotic milking has given them freedom.

The operation is run seamlessly by husband and wife duo Joanne and Darrin Cracks.

The concept of robotic milking is said to be built around the cow, ensuring cows like to be milked, making it very different from conventional milking in many ways.

One of the main differences, according to Lely, is that cows can be milked more in line with their natural behaviour. The Cracks' operation enables their cows to be milked more than twice a day whilst still being able to graze when they like, utilising a 100% pasture-based system.

Six years on from the installation of their Lely Astronaut A4 robots, Joanne says the main benefit of converting to robots was she would be able to look after 300 cows by herself, without any staffing issues.

"Fewer staff needed; for me this is one of the most attractive aspects of having a robotic system. I can look after my 300 cow by myself.

"I run our robotic dairy unit virtually on my own. I don't need every second weekend off as it's not physically demanding. I once broke a bone and wrecked the ligaments in my knee, [but] I was still able to run the robotic dairy unit, albeit much more slowly.

"I wouldn't have been able to milk in a conventional system. I do have help for calving and have someone to help with [feeding] the calves."

Discussing the upsides of their robots, Joanne says she doesn't have to strip the colostrum cows.

"Of the 300 cows we calve down each season, not one is stripped unless the robot draws attention to the cow for mastitis or high somatic cell count. Of course, if I have a cow that is not milking out in a quarter, I will put her aside and check her.

"This season I checked or stripped about five colostrum cows. I don't use teat seal."

As well as this huge time saving advantage, the cows are always milked out properly.

"This was always the biggest issue of the herringbone," she says. "Nobody wants to wait for a slow cow. Robots don't mind and they take the cups off each quarter as it is milked out. This is certainly not possible in a conventional system."

Joanne has found less mastitis in the herd, therefore has to use fewer drugs, doesn't have to change out milk lines between cows, has fewer problems with sore feet, and gets a longer herd lifespan due to the extremely gentle treatment of all cows.

"I find the heifers are able to compete with the cows in the robotic system far better than they ever did in the conventional system."

With no ambition to milk more than 400 cows through their current Astronaut platform, Joanne instead wants to improve milking times and frequency of robot visits. "I have found with robots that less is more in terms of cow numbers.

"As I am able to increase the milking speed of my cows, I should end up with more free time... and therefore room to milk more cows if I want to. We have room for improvement without increasing cow numbers."

Spending just an hour in the shed each day, plus around 20 minutes setting up the four feed breaks for the day, Joanne now has the flexibility to get her jobs done when she wants to.

"It's rare for me to be at my robot shed before 9am, unless I'm going to be away for the day. There's no need for someone to be there monintoring the robots. If they need me, they ring."

Shining with big help from robots