Don't run out of water 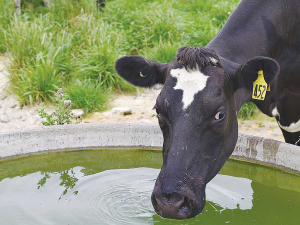 Studies have shown milk production can decrease by 10-20% if sufficient water is not supplied.

Water is something we often take for granted but over recent years, through the droughts inflicted on us, I have seen many farms whose water systems have been lacking.

As we head towards summer, now is a good time to think about how last summer went and ask, have you made the necessary changes to reduce the impact of a substandard water system?

Last summer, when Te Awamutu recorded 14mm of rain for January and February combined, there were many days when cows went thirsty and bores dried up. Some bores were lowered, and some new ones were drilled. There were plenty of accounts like, “that spring has never dried up before…”

Another cause for more farms having issues is the amalgamation of farms over recent years. If a water system was previously weak, and improvements not invested in, systems often can’t deliver when two are combined, often through larger herd sizes. Usually it is not a lack of trough access or size, but the diameter of the main and lateral water lines that is the issue. Another cause of water restrictions is loss in the system. One study has shown that 26% of stock drinking water is lost as leakage.

What do my cows need?

Studies have shown milk production can decrease by 10-20% if sufficient water is not supplied. Cows have a natural response to reduce feed intakes if they cannot access all the water they need.

In summer and autumn as we introduce higher DM feeds such as PKE and maize, these low moisture feeds have the effect of increasing cows’ water demands massively.

A lactating cow at peak milk production needs about 72 litres per cow per day to drink.  The other key number to know is that each cow will need 15-20 litres per hour at the trough soon after entering the paddock.

So multiply that number by the herd size to work out how much water is needed. Cows will typically eat for one to two hours after being milked, and then look to drink.

So it is easy to have 300 cows all looking for a large portion of their 70L all within two hours.

The other area that often gets overlooked is the quality of the water. I see some pretty average looking water in some troughs. A cow’s sense of smell is much better than ours. If you want cows to not hesitate and drink freely, then clean the troughs out at least every second year or more regularly depending on the water source (bore verses surface water). The levels of sediment can build up and remain in troughs decreasing voluntary intakes over time.

Stocking up on brass ball-cock arms is not a good permanent solution! So where is your weak point? What part of your water system is the weakest, or lets you down the most?

Seek advice from an expert in water systems. They will have ideas and solutions you may not have thought of, and will get the specifications right for any upgrades.

I often see the first solution is to throw in some more troughs in paddocks, or upgrade the size of troughs.

Often it is not the trough size that will solve the issue. Increasing trough size can alleviate the issue, but really what is most critical is the ability to deliver large volumes quickly to the trough. The two critical links are pump capacity and water pipe size. Typically, a new farm conversion will have 60mm main lines with 40mm laterals. Does that make your ¾” pipes seem small?

Install leak detection systems as well to alert you to issues early. Install isolating taps to help reduce losses and speed the process of finding that annoying water leak. If you cannot afford to upgrade the main and lateral water lines in one year, start doing a section each year.

Some other ways to help reduce the pressure of troughs in the paddocks is to install water troughs along races at strategic points. Yes, this can slow walking speed, but a rectangular trough beside a main water line can help take the pressure off on the way to the cowshed and after milking.

Water troughs on feed pads are a common solution, as is adding water to any mixer wagon feeds just prior to feeding out. Don’t delay too long from mixing to feeding and eating the ration as some mixtures can start to deteriorate quickly once water and heat is combined.

Some farms just need some more reserve capacity to fall back on. Installing another tank by the cow shed or on top of a hill can help increase pressure and reserves.

With the forecast milk payout strong, take the opportunity this season to see if you can reduce the effects of another hot summer by supplying your hard-working cows the water they need. They will repay you.

A $300 million project has been signed to try and prevent sediment loss from land to sea at Kaipara Harbour.