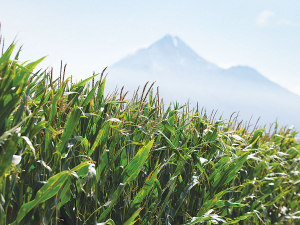 Maize growers are urged to soil test to determine the right amount of fertiliser to apply to their crops.

It seems ironic to me that the last time dairy farmers were very focused on controlling costs, we were in a totally different situation. It was the 2013/14 season and payout was low at $4.40/kgMS, having dropped from $8.40/kgMS the prior season.  In contrast, this season’s price is predicted to be a record of more than $9.00/kgMS. However, some of the excitement associated with high returns has been taken away by the large rise in on-farm costs.  Some commentators are saying the average price rise is ranging between 15-20% but some inputs have nearly doubled in cost (e.g. urea).

Do I really need this?

A good example of this is nitrogen on your maize crop.  A few years ago, Plant and Food, FAR, Waikato Regional Council, DairyNZ and Pioneer conducted a series of trials looking at whether there was a yield response to fertiliser on long term dairy effluent paddocks. The trial used a split plot design and compared industry fertiliser recommendations versus those grown with no base, starter or sidedress fertiliser.

This research showed there was no significant (NS) yield response to fertiliser on the effluent paddocks. In other words, farmers would’ve wasted their money fertilising these maize crops.

We recommend maize growers soil test to determine the right amount of fertiliser to apply to their crops, but by choosing effluent or high fertility paddocks, it is possible to reduce the cost of growing maize significantly.  The costing in the new 2022 Pioneer maize silage catalogue puts the cost of fertiliser at nearly $900/ha or 4.1c/kgDM (based on a 22tDM/ha yield).

Another example is feeding supplement when there is enough pasture to fully feed cows.  Response to supplements can be as high as 180 gMS/kgDM in situations where there is a genuine short term feed deficit, but as low as 20 gMS/kgDM when there isn’t! A great rule of thumb to avoid feed wastage is this:  when the cows are consistently leaving less than 1,500-1,600 kgDM/ha pasture residual, feed more supplement, if they are leaving more than 1800 kgDM/ha feed less.

Is there a cheaper alternative?

The price of maize silage and PKE have historically been closely aligned. Many farmers have fed both, with the ratio varying according to price.  Now, with the price of PKE sitting well above $500/tDM, whether grown on farm or bought in, maize silage is most likely a cheaper alternative.

Another example is urea. With the price of nitrogen being at an all-time high, consider using effluent from the dairy shed or feedpad as a fertiliser source.

How can I maximise the return from the money I have spent?

While reducing feed cost is important, a focus on minimising losses and maximising returns can be more profitable.

An example of this is as follows. Both Farmer A and Farmer B buy in 200tDM maize silage. Farmer A stacks theirs for 35c/kgDM and Farmer B stacks theirs for 36c/kgDM. Farmer A doesn’t manage the stack well which results in 20% wastage of the feed they purchased.  The true cost of the maize in the stack, including the cost of wastage is now 43.8 c/kgDM.  Farmer B keeps stack wastage to 10%. The true cost of the maize is $40.0 c/kgDM.  Although farmer A may have initially paid less, their substandard stack management has meant that their feed has actually cost them more than Farmer B.

Both farmers feed their silage to their cows and let’s assume they have the same feed out cost of 8 c/kgDM and milk return of $9.30/kgMS. Farmer A feeds their 160 tDM maize silage when they have plenty of pasture. They get a 50 gMS/kgDM response and a net milk return (after feed and feeding cost is deducted) of -$8,400. Farmer B feeds their 180tDM when there is a genuine feed deficit and gets a feed response of 100 gMS/kgDM. Their income from their 180 tDM maize silage is $167,400 and the net milk return of $81,000.

Through better stack management and feeding the silage when it is genuinely needed, Farmer B has made money off their silage where Farmer A has lost money.

Farmers are being told to expect further rises in fertiliser prices within weeks.

Over the last decade there has been an increasing national emphasis on measuring and mitigating the environmental impacts of food production systems.