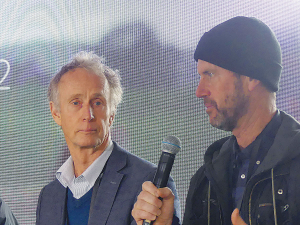 Scott McDougall, left, and Pete Morgan take part in the Halter-organised Dairy 2032 panel discussion looking at the future of the industry.

Dairy farmers being able to prove to consumers that their animals are happy, healthy and well cared for will be vital for the industry's next ten years, a panel discussion on "Dairy 2032" has been told.

"One part of that is using science, using information, using data to be able to say that's actually a happy and healthy cow," said animal health expert Dr Scott McDougall.

"We need to be able, hand on heart, to show information that says that is a happy cow. It's eating, it's drinking, it's walking, it is behaving as a cow."

"If we don't have social license, we ain't got an industry."

A professor at Massey Veterinary School, McDougall said having the data to tell when a cow does 'not quite fit the pattern" allowed early intervention on problems, which was good for her, and for the farm. Ultimately it was also good for the environment because a healthy cow isn't burning energy and protein fighting disease rather than producing products.

"Being able to measure more things about the cow, to be able, hand on heart, to say that cow's eating and drinking and walking and doing all the right things is going to be really important in telling our story internationally.

"We can talk to our consumers and say, look we've looked at this, we understand what happy healthy cows look like, and by the way, here's my smartphone, and there's Betsy the cow and she's very happy and healthy thank you very much."

McDougall was one of the speakers at the event, put on by the cow monitoring and virtual fencing collar manufacturer Halter, and hosted at the Ngāi Tahu Farming Dairy Hub in Waimakariri.

Morgan and his wife, who run 630 cows on 265ha at Pokuru, Waikato, were named the 2021 winners of the Fonterra Responsible Dairy Award. He said that when they started farming it was all about empirical evidence and operational profit but they later realised there was a lot more to the bottom line than just profitability,

Letting go of the belief that every square metre of pasture had to be retained at all costs, they began planting native bush on their more marginal land. Starting with about 10 plants, they now plant 2,000 to 3,000 a year.

It was a "quite profound" realisation that they could do it while retaining profitability, he said.

There were tangible benefits in terms of water quality and biodiversity.

Morgan said their farmer i now on a number of native birds' flight paths between the surrounding mountains and they bring their own seeds.

A Halter customer, Morgan said that in the next 10 years farmers would use "some amazing technological advances" to get better connected with their pastures and animals, also with thier staff as an integral part of the management system. But it will also be critical that farmers "stay in control" by contribution in discussions with government and regional councils, and by taking consumers along in understanding farmers' stories.

Glass said the next 10 years would be about farmers taking evidence-based farming and "moving from compliance into strategy".

Environmental ompliance was challlenging for Canterbury farmers facing "about four different levels of rules," so the key was to get beyond rules and customise a strategy for each farm, she said.

By getting into compliance early, Canterbury has a head start on the rest of the country.

Farmers may be missing out on animal health benefits because there is insufficient culture testing to find out what bugs are causing mastitis.