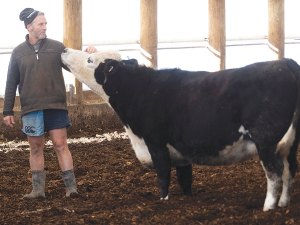 Animal welfare and comfort were among the first reasons for dairy farmer Graham Wall to install a composting cow barn on his Mayfield, Mid-Canterbury property.

Although it wasn't his original motive, he's found the barn makes it practical and profitable to milk year-round and he has taken on a winter milk-supply contract.

Wall, who has had a SmartShelter barn or about seven seasons, recently hosted an open day at his farm to showcase its use. It was one of a series throughout the country organised by the Wiri-based company, which produces a range of utility structures for farming and other industries.

At 20m wide and 140m long, the barn is typical for a SmartShelters structure. A Canadian design, it conists of a rubbered fabric roof over galvanised steel framing with open ends and sides, and concrete feeding pads on each side.

About 500mm of woodchip litter lies over a shaped gravel bed. Drainage coils at the bottom fill about one holding tank a year, which is spread on the paddocks in summer.

The company says that by providing animals with clean, dry bedding, composting barns help to improve herd health, and open up the possibility and enhance the productivity of winter milking.

In a composting barn, an aerobic system of 'good bugs' composts the effluent, keeping the bedding dry and eventually producing a nutrient-rich fertiliser.

Wall explains that they never set out to winter-milk when they built the barn.

He first visited Canada to see how barns were used there. Some had concrete floors but he opted for a soft-bedding barn because his original concerns were cow comfort and survivability.

Because they were running a high-quality genetics herd using sexed semen to get the best possible heifers, they wanted maximum survival rates.

Then when induction was stopped Wall found the empty rate went up.

He didn't want to cull good cows so keeping them milking meant he could "keep his options open".

Milking the empties through for a year, he discovered it worked well keeping them in the barn. Taking on a winter milking contract was then the next logical step.

It's been a steep learning curve, particularly with the May storm that dumped 300mm of rain in the area and caused widespread flooding throughout Mid-Canterbury.

The barn became very muddy because the cows were kept in for about three weeks to keep them off sodden paddocks, but the barn has since recovered with proper ripping.

Wall has realised that until recently he was not gettig the full composting advantage, partly because he was ripping the litter with a light shallow rake and not getting down to the lower layers.

He now uses a contractor with a deeper heavy-duty rake and is looking to purchase his own.

Wall says that at the moment the barn is carrying true winter milkers that have just calved, as well as some carryover empties that are still milking. He has dropped the winter numbers back and is successfully getting more production with fewer cows.

They are free to wander in and out to a nearby pasture.

He says the "beauty" of the system was that barn feeding maintains production so it doesn't vary too much through winter.

He's about to rotate the herd and bring in the spring calvers instead.

"They'll be fed once a day and also be free to walk in and out. Most of them prefer to come inside to have their calves, which makes picking up the calves an easy process."

Wall says the two advantages it brings are being able to recycle some cows for winter milking, and improved survivability for the spring calvers.

SmartShelter sales consultant Brett Cottle told the open day that the composting process gets the litter to about 50 degrees as the bugs feed on the woodchips and effluent. The heat evaporates the moisture so the cows don't get wet bedding. The result is a valuable compost full of nutrients that can be spread on pasture or even sold. Cottle said one farmer in the North Island has an arrangement with a supplier to take the compost in a straight exchange for fresh litter.

A key is "ripping" the litter regularly to keep it mixed.

Cottle says most farmers rip the compost once a day, some twice. It depends on several factors - for example, cows getting a lot of pasture feed would produce wetter excreta.

He says capturing the effluent is "a big, big plus for your Overseer numbers."

"Not being out in the elements, we're capturing all those nutrients and all that nitrate in here, so it's lowering our footprint outside," he said.

"At the moment we're a hundred cows less than we were this time last year, but producing more milk. So we've had to learn some stuff."

Gone Through The Roof

Brett Cottle says composting barns have been used in the US for 20 or 30 years and the market in New Zealand has "just gone through the roof" in last five to seven years.

SmartShelters now builds about 30 a year and they are especially popular as wintering barns in Southland.

"There'd be at least a hundred farms around New Zealand with our barns, maybe 150," he said.

Cottle concedes there are competitors with a lower capital cost but with lower roofs and less ventilation, so they heat up and may become unusable in Summer.

"We've got the big, clear span so it ventilates very well for the bedding and then it is 10 degrees cooler in the Summer. So that's the difference."

Cottle says the size of Wall's barn is good for about 280 to 300 cows for 24/7 full winter use, or possibly up to 400 if used for feeding and standing-off through a summer season.

The structure carries a 12-year warranty.The rubberised fabric roof is expected to last about 15 years, and replacement would be about 15% of the initial cost.