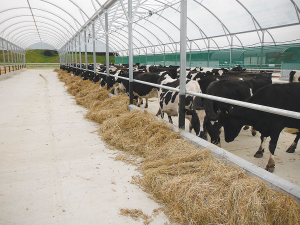 Redpath explains how to efficiently feed cows in their dairy housing.

It says each feed system has their strengths and weaknesses; some systems will cost less/more than others and some will suit farms with limited staff numbers as they are more time efficient to operate.

“It may also depend on the frequency of feeding that you are planning and the type of feed that you are feeding as to what system best suits your needs.

“Many farmers have advised us that the shelter feed-out system has a very large effect on feed uptake and minimises wastage. This becomes especially important when feeding out the more expensive supplements and minerals,” the company says.

Here are some ways to feed cows in Redpath’s dairy housing;

Placing feed onto a concrete pathway or trough that runs the full length of the buildings outer walls is a popular method of feeding out.

The path will typically be up to 1.8m wide in allowance for the cows flicking out of reach some of the feed, which then the farmer can simply go along and sweep or scrape it back into reach afterwards.

The company says the use of troughs is becoming less popular for the indoor feed systems as they can increase maintenance work with respect to cleaning out left over tainted feed or foreign debris.

Feed along outer walls - with 2.5m “standing pathway” full length on inside:

This set up is essentially the same as above except that there is a 2.5m pathway wide along the full length of the building inside the outer pole lines.  This pathway is for the cows to fully stand on while feeding and any effluent dropped whilst feeding may then be scraped clean to the effluent pond. A shallow nib is usually incorporated into the edge of the pathway to prevent the litter being dragged onto it and effluent draining back onto the litter.  The balance of the shelter is kept as a deep litter loafing area.

Redpath says its central service lane system is becoming more and more popular with many farmers as it offers a fully enclosed feed out shelter without the need to work around the perimeter of the building or drop feed outside of the shelters protection. Typically the central service lane is a 6m or arch span that connects the main loafing areas together so that the barn appears as “one unit”. The cows in the loafing area all reach through to feed from the centre service lanes feed troughs or pathways.

Cows exit to a ‘self-feed” system:

With this system the cows will actually leave the shelter to walk out onto a concrete pad located at either the end or the sides of the shelter.

The cows may then feed at their leisure and are left to return to the loafing area on the deep litter when they want.  This system has the cows self-managing themselves to some extent and requires the farmer to scrape clear the effluent that is dropped on the exposed feedpad portion of this system.

The company also offers differing length header or neck rails for the cows to reach through. The rail ‘off-set’ from the building has quite an effect on the amount of reach the cows have when feeding. The shape of the neck rail is also important to help prevent any injury from rubbing of the cows coat on the rails.

New Zealand feed manufacturers are lifting their game when it comes to quality and safety of their products.

The Government taskforce report on winter grazing says farmers are not solely to blame for all the problems associated with this practice.

Dairy goat farmers should carefully plan the feed requirements during the lead up to transition and the early lactation period.

A team led by Punjab Agricultural University, India, with researchers from The University of Western Australia, reports a breakthrough in disease resistance in brassica crops.