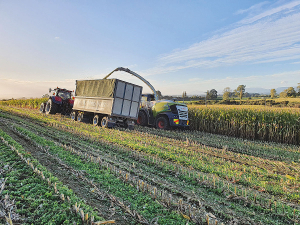 Maize was chosen for the trials because it’s a largescale crop hungry for nitrogen to grow.

PermaGreen, launched in July by Blue Pacific Minerals, is describes as a nutrient management system which has a natural zeolite core loaded with urea.

The material is applied to the soil before crops are planted. The zeolite crystal retains the urea but then slowly releases it once in the ground, ready for plants to uptake.

It is said to be able to retain cation nutrients in the soil, reducing nitrogen losses to the air and water.

Dave Hill has been leading the research and development of PermaGreen for the company and says a successful series of broadacre trials in 2020 provided the confidence to take the product to market for commercial growers.

"We selected soils we thought would suit the functionality of this material, which tend to be those that are prone to leaching nitrogen."

There were two properties in Matamata, one in South Waikato and one in Cambridge, where trial crops were planted into PermaGreen plots for the 2020 growing season.

"We chose maize because it's really a large-scale crop hungry for nitrogen to grow and we know there is pressure on farmers now to reduce nitrogen use."

Those who took part in the trial included contractors who lease ground to grow their own maize and trade it, as well as dairy farmers growing their own supplements.

Hill claims that across the trial paddocks, PermaGreen gained on average a 25 increase in dry matter yield, which was better than the 8-15% initially forecast.

"The key is the formal attachment of the zeolite and urea -  and having this high cation exchange of the zeolite immediately available when ammonium is delivered by urease activity.

"If nitrogen is not taken up by the plant in a reasonably short amount of time it may disappear as ammonia gas or leach in the form of nitrate.

"The concept we have here is that the zeolite is very hungry for ammonia/ammonium, so as the urea breaks down the zeolite grabs the ammoniacal nitrogen and holds on to it."

Hill says zeolite's ability to retain both moisture and nitrogen compounds in the soil was a major benefit to farming.

"We believe adding zeolite and urea together before planting give you the best opportunity of wrapping that effect up so you minimise those losses."

Blue Pacific Minerals was happy to share the results of the trial with any growers keen to use PermaGreen for this or future planting seasons.

"We've now got a bit of a benchmark on previous years where we had used zeolite on its own," says Hill. "Delivering the product with urea infused now gives us a new set of data that we can add to in the coming years."

"That has also given us the confidence to continue to make this product more effective and efficient for farmers."

Dave Hill says PermaGreen has the potential to help farmers meet their obligations when it comes to reducing nitrogen use on the land.

"New Zealand is still going through the process of determining what the level of nitrogen use could per hectare but we have seen in parts of the country, such as in Canterbury, where a nitrogen cap to cropping has been applied.

"In the Waikato, there are recommendations but not a mandate for a cap yet but as time goes forward, nitrogen use is likely to become a sinking-lid process, in our view.

"I would say most farmers are looking to the future, how they must manage their nitrogen and fertiliser regime, trying to find better ways to improve efficiency and to stay ahead of the game."

Winter is around the corner, and while it can pose a significant challenge for nutrient management, some simple actions can reduce winter nutrient loss.