Taking the p*ss out of leaching 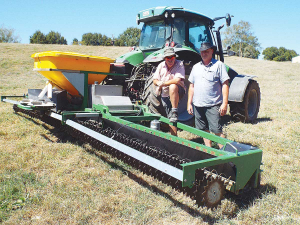 Having seen Spikey from Pastoral Robotics at the 2017 National Fieldays, we recently caught up with a unit that had completed two seasons on a dairy farm a short distance from Rotorua.

Spikey takes a two-pronged approach, to address the problem of nitrate leaching, alongside helping to promote a significant increase in dry matter production.

In practice the rear mounted spiked rotor uses electrical conductivity to detect urine patches produced by dairy cows that in turn prompts the machine to apply a liquid solution of NitroStop to the affected areas.  This serves to inhibit the usual process of soil bound ammonia in the urine converting into soluble nitrates that typically leach into the soil profile, while also allowing a greater soluble nitrogen uptake by the plants for increased growth. Over the last two years, extensive testing in New Zealand, Australia and Ireland has confirmed that the machine is able to detect 100% of the urine patches in any given paddock.

The current, commercially available Spikey system is based around a 2.5m centrally mounted base unit that in turn carries lateral wing assemblies to deliver a working width of 8 metres, said to be suitable for tractors from 85 to 120hp. The format sees 54 spiked rotors carried on spring steel arms that are insulated with a heavy-duty plastic coating. In addition to the base unit, users can also specify an optimised twin disc fertiliser, used to apply urea prills, granules or blended fertilisers at rates as low as 10kgs/ha, over the same 8m working width. The overall result sees yield increases that could range from 15 to 23% over conventional systems.

Dairy News visited Lachlan McKenzie’s operation, who liked what he saw on demo, so bought a machine and now has two seasons use under his belt. McKenzie comments that the machine is easy to use, typically operated at speeds of 10-12kph, ideally within 48 hours of the cows leaving a paddock

Discussing the economics of owning a machine that costs $65,000 for the standard unit and $75,000 when fitted with the fertiliser spreader option, McKenzie shares the machine with three other local farms, so has spread the initial capital cost. A trailed, 2.8m machine at $19,000 is also available for towing with an ATV or side by side.

Denis Collins, Sales and Marketing Manager for Pastoral Robotics, suggests that over a typical season and eight passes of the machine, costs amount to about $300/ha, which given the response in production that can be up to $1,000/ha makes for an attractive proposition.

Moving forwards, the company will continue to develop Spikey, looking at items like service exchange disc assemblies for machines used in high wearing soils. With regards to the patented NitroStop product, the company is developing blends of inhibitors, growth promotors, enzymes and micro-nutrients that can be “tailored” to suit specific soil types and rainfall profiles.

Pastoral Robotics is also actively canvassing regional councils to accept the science and show that the Spikey/NitroStop regime is a genuine solution for nitrate mitigation, particularly in sensitive areas.

Geoff Bates, Managing Director of Pastoral Robotics notes, “Spikey fills a hole left by the withdrawal of the nitrification inhibitor DCD, following detection in milk samples. The problem of nitrate leaching is possibly one of the biggest challenges the dairy industry faces going forwards-an issue that Spikey can address.”