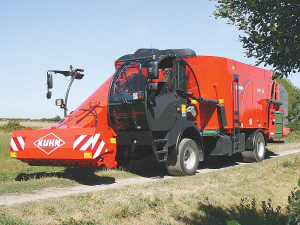 Available from 12 to 17 m3 and suited to farms with more than 80 dairy cows, the single vertical auger models are designed with a rear steering axle allowing for a short turning radius.

This new range features several models to meet varying herd sizes, with the SPV Access offered in 12, 14 and 15 cu metre capacities with a 90hp milling head, while the SPV Power is available in 12, 14, 15 and 17 cube sizes with a 120hp milling head.

The engine is placed between the cab and the tub, so offering comfortable access to perform routine maintenance.

Described as an “easy to drive” machine, precise machine control is actioned via an ergonomic joystick, with an optional pedal-controlled layout if preferred. A choice of two different control terminals, the VT 30 or CCI 50, use a simple interface logic for control of the Loading, Mixing and Feeding modes.

The design of the new range is said to allow large volumes while overall heights remain low. For example, a 15 m3 machine can now operate in buildings with less than 3.00m headroom, achieved by positioning the mixer tub low between the axles.

The machines feature right and/or left-hand side discharge, allowing feed passages requiring simultaneous, bilateral distribution to be handled in one pass. Both units can be equipped with a retractable feed conveyor under the tub, that in transport mode, remains within the machine’s outline, so protecting against impact damage.

The 2-metre wide milling heads are said to deal with all fodder and feed types, benefitting from automated control of the milling head on the downstroke to allow the force to be adapted to the density of the fodder being loaded

Machine gives a cleaner pick up

Belt mergers are known for their clean forage pick up and handling, the KUHN Merge Maxx 950 is no exception.

Kuhn has announced the release of the new Optidisc Elite cutter-bar for selected Kuhn GMD mowers and FC mower conditioners.

Kuhn has launched two mower-conditioners for use in delicate crops like lucerne or alfalfa, where leaf loss can be a major problem if conditioning is done by traditional flail type designs.