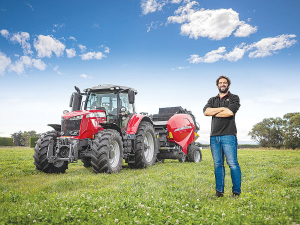 The All Blacks and Crusaders lock shares the same values and passion for agriculture as the iconic farm machinery brand, says MF, and he will be their face of 2019, featuring year-long in media advertising and promotional events.

“We’re delighted to be partnering with Sam who is a bona-fide champion on the field,” says AGCO NZ manager Peter Scott.

“He has an impressive track record and is highly regarded off the playing field for his strong interest in farming and the rural community.”

Whitelock last year led the Crusaders to titles in the Super Rugby competition and on the world stage he has played at least 100 tests for the All Blacks since his debut in 2010.

He is the youngest Kiwi ever to have played in 100 tests and is the fastest player ever to reach 100 international appearances; he played in the winning 2011 and 2015 Rugby World Cup teams and was the NZ Rugby Player of the Year in 2017.

A third-generation dairy farmer from Manawatu, Whitelock has farming in his blood, Scott says.

“This connection Whitelock has with the land and his lead-by-example mentality makes him a perfect ambassador for Massey Ferguson.”

>Whitelock is involved in Farm Strong, the not-for-profit group helping farmers with skills and resources needed to live well and keep well.

“We find Sam’s work with Farm Strong particularly admirable,” says Scott. “At Massey Ferguson and at AGCO more broadly, we believe in integrity, respect and team spirit — something we see Sam display on and off the field.”

Massey Ferguson has announced updates on the Tier2 version of the MF 8700S, which is now available on indent orders.

The Massey Ferguson MF 6700 S Stage V series has won the Agritechnica Machine of the Year Award in the mid-power tractor category.

He rakes, bales and wraps in one

Hay and silage contrator Joe Macfarlane has new additions to his arsenal this season.