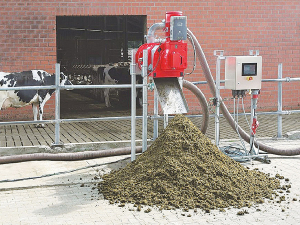 Probably best known for its chopping units that form an integral part of many manufacturers’ umbilical effluent spreading and injection systems, Vogelsang have always recognised the importance of retaining and evenly reapplying nutrients that have passed through livestock during feeding – a process that is particularly relevant as we see skyrocketing artificial fertiliser costs.

This has led to the company adding to its existing ExaCut distribution heads with the addition of the ExaCut ECC, a unit, according to Vogelsang, that does not require air suction and ventilation hoses, yet boasts a high degree of distribution accuracy.

Integral to the ECC, a new rotor design ensures the liquid manure is fed into the hose outlets evenly, where formerly a small quantity of liquid manure escaped from the air suction, a trait that can no longer happen within the new distribution head.

Also mindful of the value of both liquid and solid components of effluent, the company has also launched a new press screw separator for farmers and plant operators who are looking to separate the liquid and solid fractions of the effluent.

With the solid digestate from XSplit press screw separator containing as much as 40% dry matter, the process allows farmers to relieve the pressure placed on total storage tank volumes, although a separate storage area is needed for the solids produced, with an eye to contain any run off.

Vogelsang has rethought the process of solid-liquid separation and has brought a new approach to the screw press technology behind it. Unlike conventional screw press systems, the major difference of the XSplit separator, is that the drive is located at the solids outlet end and not, as is usual, at the inflow point of the raw material.

This layout offers the advantage of ensuring liquid cannot get into the drive system, removing the need for a shaft seal, in doing so reducing maintenance and operating costs. In addition, a QuickService concept enables direct access to the screen and screw press for cleaning and repair.

The mechanical layout sees an elastomer sealing disc, against which the screw works in the separation area, said to promote reliable plug formation, without extra aid and greatly reduced initial leakage.

This combines with the adjustable press area, to deliver dry matter content in the solid fraction.

Although this month's Consumer Electronics Show (CES) in Las Vegas is usually associated with the "geek brigade", global manufacturer John Deere chose it to launch new technology aimed at farmers and growers.

Contracting over a vast area from its Mangawhai base, Hilltop Harvesting’s beat covers Whangarei to the north, Silverdale to the south and everything in between.