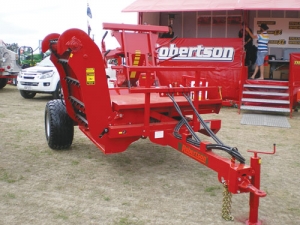 With the paint still wet on Robertson Manufacturing’s Little Ripper bale feeder, the company exhibited the machine for the first time at the South Island Field Days, taking the runner-up prize for New Zealand-made farm machinery.

Popular with livestock farmers, bale feeders have had to contend with greater bale weights as the baler manufacturers have striven to increase bale densities. This has resulted in bales exceeding 750kg at times, placing a great deal of strain on the machines and resulting in cases of instability in less-than-ideal conditions.

To address this problem the Little Ripper has two key components in its design.

Firstly, the S-type discharge elevator transfers loads back through the centre of the machine, rather than using a traditional layout in which the elevator is just an extension of the bale handling cradle. This greatly improves machine stability.

Secondly, a re-think of the bale transfer system has the bale lifted off the ground, transported and ultimately placed on the discharge table.

By taking a conventional layout of two bale spikes to lift the bale, and by adding a lateral grab mechanism, the bale is held securely in place during the transport phase; then when required the bale is gently placed on the unload cradle, unlike other systems which effectively throw the bale into the unload position. This is particularly useful with any misshapen bales, which can be prone to trying to climb off the elevator.

Hustler 360 takes feed in its stride

You don't have to travel far to find a farm using McIntosh feeding equipment, and users report robust construction, clever engineering and a long working life.

Safe on slopes, built to last