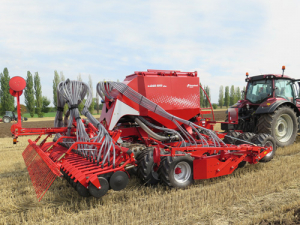 The new Kverneland 6m U-Drill Plus.

Getting crops into the ground relies on a drill that is accurate, fast and, in these high-tech days, easy to use.

Dealer principal at Power Farming Ashburton, Simon Jackson, is so impressed by the new Kverneland 6m U-Drill Plus -- which can sow seed and fertiliser simultaneously -- that he has put his money where his mouth is in ordering a demonstration rig for his mid-Canterbury business.

The seedbed preparation begins up front, with a full width tyre packer system comprising nine 800mm diameter tyres, which crush clods or lumps and pave the way for optimum depth control for the following modules.

Next item is two rows of discs, known as Qualidisc, to create a fine and uniform seedbed across the machine’s width, and offer the added benefit of in-cab control for depth and disc pressure.

Depending on conditions, up to 100kg per disc can be exerted to ensure penetration in all conditions.

After cultivation a second set of tyres packers, this time with a 900mm diameter, re-consolidate the ground to produce optimum conditions for the planting module, at speeds up to 18km/h. These packers are mounted in a staggered configuration to prevent the typical ‘bow-waving’ of soil that can occur in a parallel layout and so ensure optimum conditions.

Up above, a 4350L hopper system has the potential for high daily output and long working days. The tricky task of filling is taken care of by a hydraulically driven loading auger and the body of the hopper is split longitudinally to allow both seed and fertiliser to be carried in a 40:60 split.

Seed delivery is controlled by the new ELDOS metering system, driven electrically and fully ISOBUS compatible. Used with GPS it can communicate with KV’s GEOcontrol software to produce accuracy in seed rates, spacing and section shut-off, to avoid double seeding that can occur on headlands.

A choice of four different feed rotor inserts allow the machine to deal with small or large seeds, and fertiliser, and allow application rates from 2-40kg/ha.

Depending on requirements, fertiliser can be applied directly into the seeded row via secondary delivery tube or it can be applied inter-row – where outlets are piped to the cultivation module and placement depth is regulated by the disc cultivator working depth.

At the rear of the machine a coulter bar takes the form of a central box tube, mounted on a three-point parallelogram linkage and carries the seed distribution head. Seeding hardware consists of twin 410mm diameter discs set at 125mm spacing, with inter-row stagger allowing 200mm clearance.

Discs have maintenance-free bearings and are followed by 380mm diameter press-wheels, made from a specialised rubber compound which allows flexing and largely removes the need for rear scrapers.

Depth control is controlled from the cab via ISOBUS or the Tellus system and is easily adjusted as conditions dictate.

Final covering tines are made from high-grade spring steel.

The 6m machine folds to 3m to make shifts easier and safer.