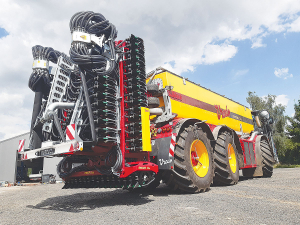 Dubbed XL, the units will complete the Profi Series which had been developed to offer flexibility in areas such as work in tramlines, low application rates and areas requiring precision application and control. The XL units will join existing models covering a range from 5.25 up to 12m working widths.

The injection modules use either a double disc, or the newly released single-disc set up, both installed at 18.75cm spacing, with the single disc said to be particularly suited to injection into stubbles or cereal crops in the spring.

As part of the package, both units are available with either hydraulic or pneumatic drip suppression system, that cuts the flow immediately when the applicator is switched off, therefore stopping any pooling and potential scorching.

Hydraulically equipped machines are able to offer section control, while the pneumatically equipped injectors offer 20 to 24 sections spaced at 75cm on the 15 and 18m units respectively, with GPS/ISOBUS controlling application.