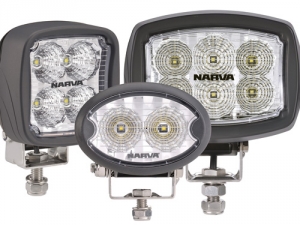 The shift to LED work lamps in recent times reflects their performance and benefits such as low current draw and a greater resistance to shock and vibration, giving a longer product life.

The Narva LED work lamp range meets the NZ EMC standard CISPR15, so users won't suffer the radio interference that can be an issue with some other work lamps.

Upgrades to some models include increases in light output by as much as 60%, achieved by moving from 3W to 5W LEDs in some variants, and from 5W to 10W LEDs in others. Despite the increase in light output, current draw remains low: the smallest draws 0.58A and the largest just 3.0A (at 12V).

Looks are sleek and modern, and strength and durability are high: the polycarbonate lenses are claimed virtually unbreakable and the mounting hardware is heavy-duty stainless steel.

The lamps come in three sizes, each available in either the standard grey finish or white for marine applications -- the latter using 316 stainless steel fittings.

As small as a pen, so easily popped into a shirt pocket, the new Narva LED Pen Light packs a powerful lighting punch.

Beacons are an indispensable health and safety device for many vehicles on farms.

Narva has released a seven-pin flat trailer socket with a heavy duty battery connector that makes it extra versatile.

A compact driving lamp for SUV, 4WD or truck — the Narva Ultima 180 LED model — is new in New Zealand.