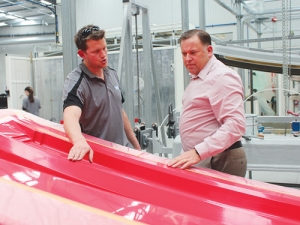 A challenge by a young Morrinsville boatbuilder to Kiwi milking systems makers in 2007 was picked up by just one – and the rest is history.

Janmaat, whose father Peter is a dairy farmer, had discerned during a Fieldays visit in 2007 the huge wear and tear imposed by concrete rotary platforms on their support structures.

Janmaat mused that the decks "could be manufactured in fibreglass which includes Kevlar, as are aircraft and racing yachts. The result would be a deck much lighter and stronger than concrete. They'd be cheaper to run and would avoid a lot of damage to the 'I' beam."

The first Centrus composite platforms had 54 bails, then 60. In the last 12 months the company has launched the Centrus 84.

Bell, recently home from the World Dairy Expo in Wisconsin where the 84 bail Centrus was displayed, reports "tremendous interest" in the platform.

"The construction, so novel... attracts a lot of interest."

Janmaat explains: "The first stage of the platform is a wooden plug which becomes the template for the mould, then 400 hours of hand sanding and buffing is involved".

"The fibreglass/Kevalr sections of the platform are formed in closed moulds... enabling a better fibre-to-resin ratio." The process allows consistent quality, he says. Each section is identical, which is not possible using concrete or steel.

"The decks are bonded together by a high-strength adhesive also used to make aircraft and by NASA in the construction of space craft.

Accuracy during the manufacture and rolling of the platform beam is plus or minus 1.5 millimetres.

And where the beam meets the platform the pivot roller maintains perfect alignment with the rotary platform's support structure -- the 'I' beam. The resulting 100% contact enhances the platform's performance and decreases wear and tear.

Self-lubricating cast pivot rollers between two bearings are the only components that wear.

"Micro adjustment within the roller assembly provides precise height settings and allows a degree of fine tuning and precision never before achieved.

"This is especially important because cow loadings constantly change, especially at the beginning and end of milking.

"That uneven weight puts a point loading on rollers and bearings and can result in uneven wear which ultimately affects a platform's operation. The pivot roller overcomes that problem, making it relatively simple to maintain the platform's alignment."

The lower weight of the Centrus 84 is a big attraction for farmers, Bell says.

The 14 sections of a Centrus 84 platform fit into one shipping container.

"These decks are in demand worldwide by farmers operating intensive farming operations milking 24 hours a day, seven days a week.

"The Centrus 84 arrives on site anywhere in the world accompanied by a team from Waikato Milking Systems who oversee the unloading, setup and commissioning. Lasers are used to ensure the foundations and structure are true and precise."