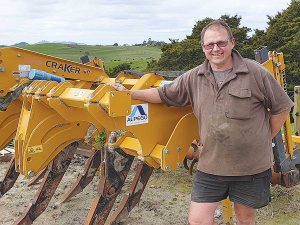 Hilltop harvesting is operated by Wayne and Nicola Preston, is based on the south-east side of the Brynderwyn Hills.

They offer a range of services including cultivation, seeding, undersowing, roller drilling, round and square baleage, conventional bales and earthworks.

Wayne says, “The strength of our Alpego power harrows and subsoiler are a huge bonus when working on our clients’ ground that is typically very heavy and undulating”.

The couple have owned five Alpego power harrows over the years, purchasing their first, a DX500, in 2004. A 6m Alpego Dmax 600 arrived last year, while an older DX600 model was replaced by an identical unit in October.

The Dmax folding power harrows are constructed using a heavy-duty frame, with power delivered via a 1000 rpm central driveshaft to a multi-speed gearbox that sends the drive to each harrow laterally, via cam-clutch protected drive shafts. Individual rotor shafts run on Twin-Force ball bearing assemblies, while an independently adjustable levelling board ahead of the roller assembly helps break clods to the required size and create a level finish.

“The Dmax power harrow holds the ground well, helped by its integral weight, with the independent mounting of each harrow allowing it to contour well,” said Preston.

“We run 350hp tractors, so the 450-500hp rating of the Alpego gearboxes means they are really on top of the job. We get high outputs, managed to clock up over 350 hours last year and never had any problems.”

The KFR Cracker subsoiler is said to be able to penetrate the hardest ground and leave a level finish, using a hydraulically depth-controlled, double-spike rear roller that crumbles the soil behind the angled ripping legs.

“It’s very robust and well built,” said Preston. “We pull at full depth with 350hp and make a great job.

“The only irritation is having to change shear bolts, which we accept saves us doing damage to the legs with hidden objects.”

The practice of sub-soiling, by no means new, has been acknowledged by farmers and contractors as helping improve drainage and creating healthier soil conditions.