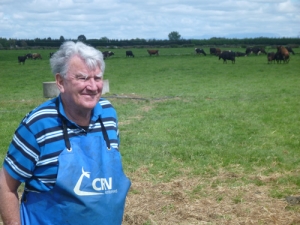 Kevin Bell with cows he has inseminated.

At 80, it's no surprise that Kevin Bell has outlasted the original farmers he worked for at the beginning of his AI career 56 years ago.

The original farmers may have handed over their farms, but Kevin is still working – not as fast as he used to, he admits – but he's still working.

Kevin was trained by the Auckland Herd Improvement Association in 1959 at a freezing works in Auckland, at the age of 24.

"It was new technology in those days. I had followed a family member up to the Waikato from Christchurch to help him on his farm and I'd see this joker driving up and down the road and wonder what he was doing," he said.

"He told me about artificial breeding and I thought it sounded like a good string to add to my bow, so I did the training and have worked in AI every year since."

This spring, with failing eyesight and uncertainty around retaining his driving license, Kevin is doing just five herds around Rangiora, where he lives – but it's still "a couple of thousand inseminations".

"In those days, I only used to do what they called spring groups, where I was employed eight or nine weeks of the year, but I used to do a spring group in the Waikato and then another group back down here in the South Island, so I would get about 17 weeks of AI out of that every year. I did that for about ten years."

At the end of those ten years, Kevin got a full-time job with the South Island Herd Improvement Association – mainly as an artificial breeding technician servicing the town supply of Christchurch, but he also trained technicians and did a lot of maintenance work for the herd testing department.

"When the Herd Improvement Association was taken over, I decided to go out on my own."

By that time he was married and based in Rangiora, so he joined Guthrie Breeding Services, which had a bull centre in Kaiapoi, where he worked full-time running his AI business outside of work hours, inseminating cattle on the way to and from work.

It sounds like hard work, but Kevin says when you enjoy what you do, you don't work very hard at all.

And enjoy it he did, carrying on that way for another 10 or so years until Guthrie Breeding Services was taken over by Elders and then Ambreed (CRV Ambreed) and eventually Excell Breeding.

Now working for himself, operating under Kevin Bell – Bovine AI Services in the rural area outside of Christchurch, Kevin says while a huge amount has changed in the dairy industry in the last 56 years, the method of getting semen into a cow has not.

"They no longer use carbon dioxide to freeze semen; it's liquid nitrogen now, and instead of storing the product in ampules, we now use straws, but other than that, not a lot has changed.

"Meanwhile the face of dairy farming has changed dramatically. The herds are bigger, the sheds are bigger – and rounder – and there is a lot more science behind farming these days."

Through it all, Kevin says he feels pleased to be able to have done a good job for the farmers he's worked with.

"I haven't had too many complaints, it's all been very enjoyable to me and I'm glad that I've been able to do the work for so long," he says.

"It gets me out and about and in touch with the industry and the younger farmers – 56 years later and I still enjoy AI."

Comparing apples with oranges in insemination

It is true that the current frozen sexed semen product SexedULTRA 4M is the result of almost three decades of research and development.

A familiar sight on our roads, Fonterra's milk tankers provide the vital link in getting the "white gold" off dairy…

Cow collar with a range of benefits

The potential for positive environmental impacts, improved animal health awareness, and on farm financial gains was what drew the judges…

Cultivation, seeding and fertiliser application specialist Amazone claims its new AutoTS spreading system can increase yields along the borders of…

New Holland is set to hold a "Youniverse" digital fair, a 10-day online event, next month where farmers and prospective…

Mounted bale unrollers are popular on New Zealand farms, with one Kiwi-owned manufacturer claiming to have figured out what works…

OPINION: Oat 'milk' is facing a crisis of sorts.