Who’s paying what on M. bovis? 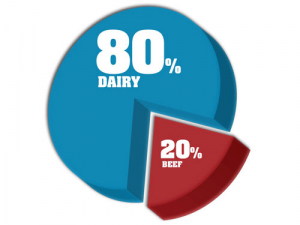 Discussions are continuing on how dairy and beef sectors will split the M. bovis bill.

Agreement between the dairy and beef sectors on who pays what for the industry share of eradicating Mycoplasma bovis is still a month away, say industry sources.

The cost of the eradication programme is reckoned $886 million over 10 years. MPI says $16m of that is loss of production and will be borne by farmers, while $870m is the cost of the response, including compensation.

But exactly how it will be split between them remains under discussion. Dairy industry sources say a 80/20 split between dairy farmers and beef farmers would be fair.

However, beef farmers are pushing for a 90/10 split, pointing out that dairy farms are at the centre of the outbreak.

“We continue to work closely with Beef + Lamb on it,” said a DairyNZ spokeswoman. “There will however be an announcement made when an agreement is achieved.”

The process is being handled under the guidance of the GIA (the Government Industry Agreement for Biosecurity Readiness and Response), which is the partnership between primary industry and the Government to manage pest and disease incursions.

BLNZ chairman Andrew Morrison said it is crucial to get it right now, because Mycoplasma bovis makes a good test case to produce a formula for any future incursions.

Morrison said the determination should be “reasonably formulaic,” taking into account the size of each sector and the impact at the farmgate.

However, decisions have to be made on what is in or out of the scope of the agreement, for example, whether the supply of feed should be assessed as part of the dairy sector or a service supplied to the sector.

Morrison declined to put a figure on the likely split.

At the time the eradication was decided on in May, Morrison said they expected the beef industry’s contribution to be very small “due to the relative value of the industries involved and because the impact on beef production is expected to be limited”.