Westland back up to speed 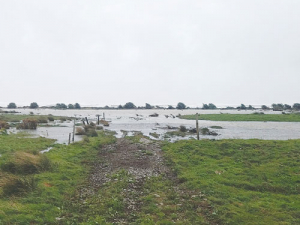 Westland Milk Products is completely back to full collection and production at its Hokitika factory after the devastation caused by ex-cyclone Fehi.

The West Coast and Nelson regions bore the brunt of the storm, which struck late on Thursday February 1, smashing roads and other coastal infrastructure, causing slips and bringing down many power lines.

The power outages affected many areas including Hokitika, where Westland’s main factory is located. Without power, Westland was unable to process milk and had to send it to other dairy companies in Canterbury.

Storm damage also blocked many roads so tankers could not get through to some supplier farms. Some had to recycle milk to their effluent systems, either when they reached their onfarm storage capacity or if power outages meant milk could not be kept refrigerated.

“From the moment the first impact of the storm was realised, our focus was on collecting as much milk as possible and forwarding it to other processors to avoid waste,” said Brendish.

One farmer who had to dump about three days milk was Richard Reynolds, who farms on the coast at Barrytown, about 25km north of Greymouth.

He had one paddock inundated by saltwater and lost about about 1km of fencing. One neighbour lost two big sheds and another lost power.

Although Reynolds’ power stayed on, they all had to dump milk because the road to the south was washed out.

However, he reckoned the area got off lightly compared to some. The inundated paddock was “not too bad” because the storm also brought a lot of rain to wash away the salt.

“Some of it’s browned off but even the stuff’s that browned off is starting to shoot back.”

But Reynolds said he had also lost an estimated 200kg/ha of grass cover from the rest of the farm simply from wind damage, leaving the farm a bit short of feed on the back of the unusually hot dry summer.

“We had it and now it’s gone. I was quite looking forward to grazing it.”

Brendish said it was far too soon to put a figure on the amount of milk lost or the potential economic impact on the company or individual suppliers.

“It will take a while to get all the information from suppliers as to how many litres they had to put through their effluent disposal systems.”

Brendish said it had been a tough time for its farming families.

“On Monday and yesterday (Waitangi Day) I visited shareholders around Hokitika and also further south. I saw for myself the damage caused by the storm and also heard how communities worked together to support each other.

“We expect to give shareholders a detailed storm damage report at scheduled March meetings,” she said.