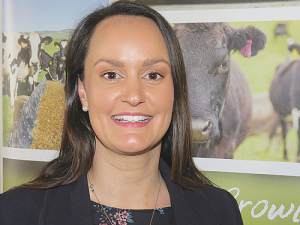 A weaker New Zealand dollar may help offset the decline in Global Dairy Trade prices, but the reasons behind the lower dollar are more significant to dairy, says Rabobank dairy analyst Emma Higgins.

That result, where the average price index slid 5% to US$3232/tonne was “ugly”, says BNZ senior economist Doug Steel. Whole milk powder (WMP) took the biggest decline with a drop of 7.3% to US$2905/t.

Higgins says this decline coincides with Fonterra’s announcement of May 2018 collections, which were up almost 7% for the month.  And Fonterra has re-affirmed its “ambitious” expectations for 1.3% growth in milk production this season, to 1525 million kgMS.

Higgins says the weaker Kiwi dollar seen since the announcement of opening forecasts may help to offset the decline in prices, although individual company FX hedging policies may limit the benefit.  But the reasons behind it are more worrying.

“Clearly, the ongoing trade frictions are having an impact on sentiment and therefore prices in the latest GDT Event,” she says.

Geopolitical volatility continues. The next round of trade war implications looked set to play out late last week, with the introduction of new trade tariffs by China and Mexico likely to be imposed on the US from July 6, 2018.

ASB’s Penny says the dairy auction price fall reflects nervousness stemming from increased trade tension between the US and China. Ironically the increased Chinese tariffs on US exports will actually make NZ products cheaper by comparison.

“For now though, dairy buyers are more nervous about the fallout from the increasing trade tensions and the potential impact this could have on dairy demand.”

Currencies for key dairy buyers have fallen: the Chinese yuan is down about 3% since the last auction and Chinese stock markets have been hit.

BNZ’s Steel points out that while WMP fell 7.3% at last week’s auction, longer dated prices fell by at least 11%.

“These are material declines and bigger falls than was anticipated on the day -- an ugly result,” he says.  Prices are nearly 9% lower than a year ago.

“It is also important to note that the NZD has weakened over recent weeks, offering support to prices expressed in NZ dollars – the ones that matter for milk price. NZD/USD was down more than 2% since the previous mid-June auction, taking the edge off the drop in international prices,” he notes.

The RBNZ included lower dairy prices in its May monetary policy statement, but with WMP at an average of US$2905/t, prices have dipped below the RBNZ’s medium term view of US$3000/t.

News that Fonterra milk collections were up 6.6% year on year in May shouldn’t have surprised anyone, says Steel. But coupled with product volume picking up seasonally on the auction platform – up 22% on last auction -- the strong milk growth headline may have checked some buyers’ enthusiasm, Steel says.

Other factors may have been the EU continuing to unwind its massive stockpile of skim milk powder, India re-entering the world market and renewed weakness in international grain prices.

Meanwhile, some growth concerns in China and a softer Chinese yuan may have curbed Chinese demand.

“There appeared no sign of extra Chinese demand for NZ or EU product as a result of the prospect at week’s end of higher Chinese tariffs on US product (in retaliation to US tariff threats).”

BNZ is sticking with its $6.60/kgMS forecast, but with the risk tilted to the downside.

“It is worth noting that prices often drop in June and July on seasonal grounds so we wouldn’t over-react to one auction result especially with recent signs that global milk supply growth has been generally underwhelming,” Steel says.

Dairy prices have bounced back in the latest Global Dairy Trade (GDT) auction.