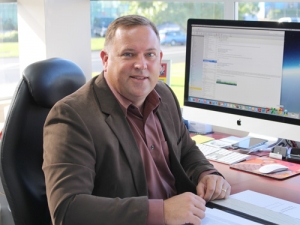 Waikato Milking Systems has been named the 2016 Air New Zealand Cargo ExportNZ Exporter of the Year.

The company was also named the QBE Insurance Exporter of the Year Award ($10m to $25m category).

Founded in 1967 the 100% Kiwi owned Waikato Milking Systems is one of the world's leading designers and manufacturers of a wide range of dairy technology – from rotary and herringbone milking platforms to an extensive range of componentry.

At the award ceremony in Auckland last week, Barry Squires, convener of judges, described Waikato Milking Systems as 'a New Zealand success story ... an outstanding example of the growth of agritech exporters'.

It is the first year the awards have been open to Waikato businesses and chief executive Dean Bell admits he felt honoured to be included in a line-up of finalists which include some of New Zealand's pre-eminent innovators.

Winning the awards was, Bell says, "a tribute to an extraordinary bunch of people.

"We have gained worldwide renown as one of the leading innovators and manufacturers of rotary milking systems and dairy technology," Bell says.

"This reputation was cemented when we introduced the revolutionary Centrus Composite rotary platform a few years ago. Designed primarily for intensive 24/7 dairying environments, the platforms are constructed from a composite material which contains Kevlar – similar to the material used in manufacture of aircraft, racing yachts and bullet-proof vests.

"Centrus platforms are 80% lighter and five times stronger than traditional concrete alternatives. This extreme strength and lightness translates, on farm – to reduced wear and tear, lower maintenance costs and longer life than any other dairy platform in the world.

"Today, the Centrus Composite platform – in a variety of sizes – is our flagship product, unique to Waikato Milking Systems and receiving growing international demand.

"We also design and manufacture a large range of herringbone dairies and an extensive and sophisticated range of dairy technology and provide this, backed by extraordinary service, to farmers in dairy nations around the world.

"All of this innovation and design and manufacturing excellence is achieved by a team of extraordinarily talented Kiwis who ARE the Waikato Milking Systems brand."

Dean Bell says he is proud to "represent that team because, to a person, we share a commitment to be the best in a fiercely competitive global dairy technology market, producing innovative, superbly designed and built products which transform the milking environment and add new levels of ease and efficiency to the lives of farmers around the world".