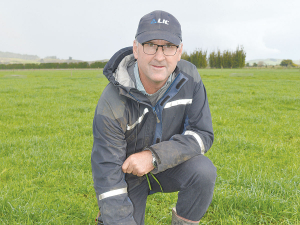 Northland farmer Murray Jagger says it's time to focus on alternative pastures that can deliver better milk and beef yield.

The days of relying on perennial ryegrass should be a thing of the past. Instead he suggests new cultivars of tall fescue and cocksfoot, as supplementing natural sub-tropical pasture kikuyu for more extreme summers in Northland and Waikato.

On his 550ha farm at Whangarei Heads, Murray and his wife Helen run 650 cows on 220ha dairy platform. The remaining 330ha is used for beef and dairy support.

"The identification and selection of new cultivars of tall fescue and cocksfoot have been game changers toward the replacement of perennial ryegrass in our farming system and I would suggest the future with a changing climate," he says.

Jagger's farm is a kikuyu dominant summer dry farm with varying rainfall between 650-1100mm per annum.

Summer cropping, in shed meal feeding, Italian ryegrass sowing and mulching are all practices used for a sustainable system. However, perennial ryegrass pastures have limited persistance and are no longer a focus as more resilient pasture varieties are grown on farm.

Jagger notes that Northland and some Waikato regions are not always conducive for ryegrass to persist without seedling recruitment.

He says while there are a number of management tools and varying herb, plant and crop varieties available to make pastures more resilient the modern cocksfoot and fescues seem to be farmers' best option.

"These modern varieties have root structures and mass to mitigate the seasonality effect we are experiencing and have the ability to be resilient through dry summers."

"Farm management practices must adapt to be more vigilant, dynamic and fluid to ensure the best rest and survivability is achieved from the resilient pastures."

Jagger also points out that the positive effects of personal wellbeing of those farming in areas of climatic pressures should not be underestimated.

Resilient pastures have the ability to produce valuable feed in times of climatic stress and reduce the pressures on both farm staff and livestock.

Jagger says they also have an animal grazing preference over perennial ryegrass pastures mainly due to the increased palatability of the modern varieties.

"This increase in palatability converts directly to increased milk production and weight gain," he says.

"Although an increase in palatability leads to extra pressure on plant population during times of climatic stress, it can be mitigated by focused farm management."

There are also environmental benefits.

There is also an added value of an increase in the ration of clover present in the cocksfoot and fescue pasture becasue of the slower establishment of the sward. This increase in legume effect creates a greater natural nitrogen fixing effect reducing reliance on application of manufactured nitrogen.

"Not only do we achieve an environmental improvement of meeting our N targets through greater legumes in the sward, we have a positive effect on soil degradation and movement," says Jagger.

"Due to the root structures and mass the cocksfoot and fescue pastures have the ability to hold soil structure together and soil moisture.

"Soil cracking and exposure only happens in extreme conditions. This in turn allows the plants to compete for open space and slow down the invasion of unwanted species and slows down the reversion of kikuyu back into the paddock.

"This trait in particular follows one of the same principles that regenerative agriculture is focused on, but it is achieved through a conventional grazing system."

Down The Wrong Rabbit Hole?

Murray Jagger says for the last 40-50 years as farmers, they have complained about lack of perennial ryegrass resistance.

"Plant breeders have bred aggressive, high yielding and late flowering perennial ryegrass plants and farmers have responded to that by increasing the farm stocking rates to eat the more aggressive plant.

"So, have we been going down the wrong rabbit hole for 40 years trying to make perennial ryegrass more resistant when we should have been focused on pasture plants that are resilient and regenerative?"

He says all this time farmers have had resilient pastures in the tool box but only now we are seeing the true productive, environmental and economic value of them.

According to Jagger, there should be a greater focus on current cocksfoot and fescue pastures.

Dairy farmers are encouraged to attend the upcoming joint New Zealand and Ireland Pasture Summit forum, which will address whether pasture is still the way forward.