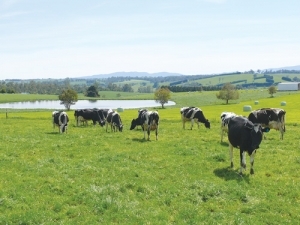 Federated Farmers is calling for the Government to apply diplomatic pressure with European countries wanting to move backwards towards more regulation.

Federated Farmers is calling for the Government to apply diplomatic pressure with European countries wanting to move backwards towards more regulation.

They say action is needed as banks start to put pressure on farmers.

A member poll from Federated Farmers also shows that more than one in 10 dairy farmers (11.1%) are now under pressure from banks over their mortgage. That's up from 6.6% in August and 7.6% in November.

"So far we've been pleased with the support of banks and their long-term view of the dairy industry, but when you're talking about one in 10 farmers feeling the squeeze that's a worrying statistic," says Federated Farmers Dairy chair Andrew Hoggard.

"With prices not expected to recover until next year this increase in pressure from banks means farmers need to be even more pro-active around budgeting and scenario planning, and make the most of the support available from DairyNZ, accountants and farm advisors."

Hoggard is also calling for action to be taken to address the global market conditions impacting on New Zealand's dairy farmers.

"Softer demand from China and displaced product from Russia isn't helping the situation, but the real issue at the moment is increased production from Europe driven by the retention of subsidies," he says.

"It's concerning that some European countries are wanting to move backwards to more regulation. Instead they need to keep moving forward to more market orientated structures. The more farmers around the world live with the economic realities of the decisions they make, the more stable a market we will get for all farmers."

"This is something our government needs to take up through direct diplomatic channels and the World Trade Organisation, and if next season is going to be any different to this one they're going to have to move quickly."

The Federated Farmers poll was conducted at the beginning of February. It had a sample of 1225 members representing all 24 provinces and seven industry groups. The poll asked a question about mortgage pressure also used in Federated Farmer's August and November Banking Survey's, which also had a similar sample size.