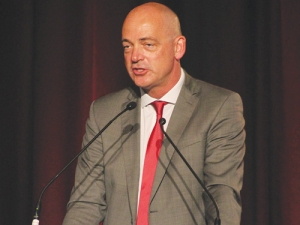 Fonterra will focus on 'tier three' and 'four' cities in its bid to double sales in China in the next five years to $10 billion per annum, chief executive says.

Most of the growth in the past five years has been in tier one and two cities, which the main players are focussed on, Spierings told a China Business Summit in Auckland.

Tier three and four cities have had big growth and present a huge opportunity, but will be a different ball game. Social media e-commerce has 650m internet users and e-com is growing very rapidly.

China is Fonterra's number-one market but the outright growth of the last five years will not continue into the next five years: 5-6% per annum growth is optimistic in dairy.

Food service has grown from $600m to $1.5b in five years and it is going quickly to $2b. "To put it in context, people have told me that is the entire wine industry of NZ – that is food service only."

Fonterra didn't really have brands such as Anchor, Anlene and Anmum present in China in 2010. Anchor is now in the top five e-commerce milk brands in China. It is early days for brands, he said. They had launched Anmum and bought it into the partnership with Beingmate.

Fonterra has 10 farms which created a turnover this year of at least NZ$300m. "We want use that milk for partnerships and to connect into our brand business. We want to capture end-to-end value," Spierings said.

Strategic partners who are customers in ingredients knock on Fonterra's door because using Chinese fresh milk will become policy.

"If you have access to safe, fresh milk you are a strong partner," he said. "For the investor the Chinese journey is really about 'can we lift Chinese businesses from strong Chinese players to global players?' and therefore you need win-win partnerships."

China will become a global player with global companies. "The government has been implementing adjustments very fast; if we lose speed and build walls we are not going to be part of the game."

In the agenda to double the 2014 $5b footprint in China to $10b in five years, ingredients will, percentage-wise, be a lesser part of the equation; it will still be a massive part, given the $6b target.

Twenty percent of the targeted business will be from consumer and that involves e-commerce and digital.

"All players have invested in tier one and two cities; we will go tier three and four," Spierings says.

The farms will grow from 400m L to 1b L but those will connect to partners and Fonterra brands. The global milk pool strategy for Fonterra is connected to Beingmate in China, but also connecting NZ, Australian and European milk pools and building the Chinese milk pool will provide options. "That's a stronghold and unique in the world."

Their strategy will be to adapt very quickly, reflect so that they are not always reacting and to adapt.

Fonterra chief executive Theo Spierings says he welcomes competition from Chinese players investing in New Zealand, but he is also concerned about them.

"Should we be concerned about Chinese companies investing in NZ because of brand NZ – because of the premium prices they can achieve in their market? I don't think we should be concerned," he told a Chinese Business Summit in Auckland, in answer to a question.

He is more concerned about Chinese customers for ingredients and infant nutrition shifting towards Europe.

"Europe is gaining share. If Europe gains share, that means all of NZ is losing share. So Chinese players investing in NZ because of Brand NZ and food safety and quality is a good thing.

"What should not happen is a lot of capacity being built... that appears to be idle capacity in five years from now."

When asked about Synlait selling milk powder at about a third less than Fonterra's price, Spierings said those developments were wrong if you wanted to drive value for your country and a premium for the NZ brand. He had not heard of a third less, but had heard various prices.

He could not tell competitors what to do "but it is not doing us any favours as a country".

Spierings was asked whether Chinese consumers in China could know that what they were buying really was a Fonterra product rather than a copy.

The 1080 scare made Fonterra speed up technology to guard against this, he said. Tamper-proofing on the can will be crucial and they have fast-tracked large investments into pharmaceutical grade resolutions for tamper-proofing.

They will also use two dimensional barcodes as used on AirNZ boarding passes so the consumer can scan with an iPhone and it tracks the product back to the factory.