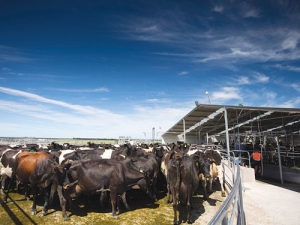 The three finalists for the 2016 Ahuwhenua Trophy BNZ Maori Excellence in Farming Award for Dairy were announced last week.

Two are South Island farms, the other is in South Waikato. Here are profiles of each finalist.

Ngai Tahu's dairy farming operation consists of seven units, of which Te Ahu Patiki and Maukatere are located side by side near Oxford, Canterbury. The area is known as Te Whenua Hou and was originally a New Zealand Forest Service radiata pine plantation commonly known as Eyrewell Forest.

Ngai Tahu decided to convert forestry to dairying to get the best economic return and to develop wider opportunities for whanau. The first farm came on line in the 2012-13 season. Full development of Te Whenua Hou will see 13 dairy farms and seven dairy support farms across the property. All the land is flat and most of the milking platforms of both farms are irrigated by water from the Waimakariri River.

The milking platform at Te Ahu Patiki is 355ha and runs 1251 Kiwi cross high BW cows that last season produced 468,747kgMS. The slightly smaller farm Maukatere has a 290ha milking platform on which 979 Kiwi cross high BW cows produced 413,058kgMS last season. There are also a number of dairy support blocks owned by Ngai Tahu where stock from the farms are sent in the autumn.

Being new farms, the soil is still quite sterile and there is a focus on increasing the organic matter in the ground to build up fertility. Both farms have 64 bail rotary sheds with a lot of modern technology and inside automation to improve the efficiency and minimise the environmental footprint.

The pivot irrigation systems on both farms have a variable rate feature – precision agriculture that allows water to be used efficiently and in an environmentally friendly way. The system can be calibrated to only apply water to areas that need it and to avoid applying it to already wet or sensitive areas.

The Ngai Tahu operation is careful to keep a small environmental footprint by, for example, reducing the amount of supplementary feed used and better using pasture. This will help improve profitability, especially during the dairying downturn. The farm is not only trying to meet consent conditions but get ahead of that in a genuine commitment to kaitiakitanga and iwi values.

Ngai Tahu is also looking at how best to utilise the bobby calves produced on the farms.

Five staff are employed on each of the two dairy farms, but in its overall dairying operation Ngai Tahu employs about 70 staff. It also helps run a training programme called Whenua Kura designed to give young Maori from Ngai Tahu and other iwi the skills to make a career working on their farms and in the wider agri sector.

Tewi Trust is situated near Okoroire (near Tirau) in South Waikato. The area is famous for hot springs and a beautiful hotel.

Tewi Trust is named after an original owner, Tewi Hoera, who passed the land on to his daughters who leased it to a local farmer. When the lease came up for renewal in 1941 the men of the trust were serving overseas in the NZ Army Maori battalion so the land was leased out again for 30 years.

When this expired the trust took back one parcel of land and a year later a second parcel to form the farm but these were separated by a privately owned farm.

At that time a new shed was built and general improvements made to the farm. But the trust faced further challenges and decided to employ a 50/50 sharemilker. In 1991 a small parcel of land was exchanged to physically connect the run-off to the main farm. In 2000 the trust bought the land the two blocks surrounded.

Tewi Trust has 53 shareholders, some of which are individual trusts which are part of Tewi. Some of their land is part of the entity by way of lease. There are two waahi tapu sites on the property – one is Tohu and the other is in a paddock where ancient bones are buried.

Today the farm is still run by a 50/50 sharemilker and consists of a 138ha effective milking platform on which 430 Friesians produce 174,405kgMS. The cows are milked in a 40-aside herringbone shed.

The land is flat-rolling with some steeper slopes. The soil is Tirau ash and is very good dairy land. The farm runs on system 2 which means the cows are fed mainly grass and receive supplements such as PKE on the shoulders of the season and to cover adverse events.

Up to 6ha of turnips and 4ha of chicory are grown to protect against the summer dry. Each year about 90 tonnes of grass silage is produced – about half on the main farm and the other half on the leased block. About two thirds of the maize used on the farm is grown on the lease block and the rest on farm.

Tewi Trust is a great example of how a small and determined group of whanau have, over many years of adversity and challenges, achieved their dream of farming their own land successfully and profitably, keeping a strong focus on Maori values.

The proprietors of Rakaia Incorporation's Tahu a Tao farm have a long and proud history dating back to 1886. The present 216ha property near Ashburton, 8km from the Rakaia River mouth, runs around 830 Kiwi cross cows that produced 371,294kgMS last season.

In the early days this area challenged travellers, particularly the river crossings. Tahu a Tao is the Maori name for the Kyle district where the farm is located. It is also known for being a resting place for travellers where there was mahika kai – where food was gathered.

Tahu a Tao was converted to dairying in 1996 with a highly reputable dairy consultant, John Donkers, playing a major role in developing the property which has always operated with 50/50 sharemilkers. The current sharemilkers Mark and Julie Cressey are in their ninth season.

When the farm was first converted old pastures were sprayed out and new ones planted and since then the incorporation has made concerted efforts to renew pasture with the latest seed cultivars as a key means to boost production.

With the conversion came new fences, stock water and irrigation and a 50 bail rotary dairy shed. Two bores supply the four irrigators that run on the property. Irrigation is at the foundation of the overall dairy farm system. It is tightly managed using soil and water measuring technologies. Water metering and moisture monitoring technologies help identify the optimal time to irrigate.

About 200 replacement calves are reared each year. There is a strong farm culture with particular emphasis on animal welfare especially with the treatment of bobby calves which are fed good quality colostrum milk for four days before being sold. Health and safety also gets high priority status on Tahu a Tao.

Since the conversion capital works have continued, the most notable being extra staff accommodation designed by Julie Cressey.

Being close to the Rakaia River, the soils on the farm are free draining and ideal for dairying.
Soil tests are taken annually and close attention is paid to recording data on the property. Weekly farm walks and feed budgeting are critical aspects of management.

Not surprisingly matters relating to the environment, kaitiakitanga and iwi values are important, for example the implementation of a recycling system. This includes all farm and household waste which is stored in special containers. Silage wrap, bale string and plastics are stored out of the wind then recycled.

The dairy shed effluent handling system has a pond that stores 15 days' capacity. The storage provides flexibility in the application of effluent to the land, averting nitrogen leaching. The management committee takes seriously its role in giving value to the 300 shareholders.

Shareholders may visit the Rakaia farms annually to see their investment, meet fellow owners and understand the life and style of a working dairying farm.