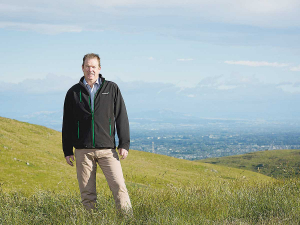 Departing Ravensdown chief executive Greg Campbell says it's time to hand over the reins to someone with new ideas.

He took over in 2012, when the farmer-owned fertiliser co-op has - for the first time - paid no rebate to shareholders, carried a high level of debt and reported poor profit.

Campbell remembers having to front up to the board with his plan to revitalise the business. He says the board was "bold" and backed his plan.

"I also remember having to roll out the plan...having some tough discussions with our shareholders around what we were planning to do," he told Dairy News/

"Across the business there was overwhelming support for the plan and we delivered on that promise."

Campbell started his six-month notice period in December last year. After serving eight years at Ravensdown, part of a 25-year stint in chief executive roles he says the time is right to step down.

"I'm not leaving through being dissatisfied. I think it's time to hand over the reins to someone with new ideas."

Campbell attributes the achievements at Ravensdown during the past eight years to a team effort by staff, leadership, board members and farmer shareholders.

"We have accomplished some good things together," he says.

In the early years, he was instrumental in the co-operative exiting Australia, focusing on the financial fundamentals and bcoming even more science-led.

Campbell initiated the setting up of what was to become the largest farm environmental consultancy in New Zealand. This was done in anticipation of possible regulations and also in response to shareholder feedback that farmers needed to help mitigating their impacts - not just growing as much as possible.

His consistent message, over the years, is that the farm-erowned co-operative needed to be selling the right amount of fertiliser, not the most.

Campbell has encouraged greater nutrient use efficiency so that the expense and potential environmental impact of essential nutrients were optimised.

The ClearTech effluent management system, which he believes has the potential to transform a dairy farm's greshwater use, was launched in 2018.

The purpose of Ravensdown's business changed under his watch - moving from providing essential impact at lower cost - to enabling smarter farming for a bettr New Zealand.

Campbell believes his legacy is leading the co-operative's transformation from a predominantly "fert company" to being seen as the "farm nutrient and environmental experts".

Search on for new Ravensdown CEO

Farmer-owned cooperative Ravensdown is looking for a new chief executive.