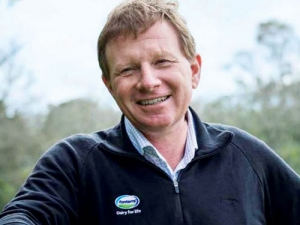 Global milk production is at last responding to price signals, he says.

The farmers were expecting a number like the forecast $4.25/kgMS – up 35c from last year, Wilson told Dairy News. The milk price is just part of the payout.

"Our focus is to maximise the total payout," he says. Fonterra is required under the Dairy Industry Restructuring Act to forecast the milk price at the beginning of the season and it is important to give farmers that signal for budgets.

Federated Farmers dairy chairman Andrew Hoggard says farmers were hoping for a figure more like $4.50/kgMS and will be disappointed. But they are resigned to another tight season. He says the milk price is still likely to be below the break-even price for most farmers.

On the positive side, Wilson says global supply growth is really starting to come back.

"New Zealand is down, Australia is down and forecast to drop quite a bit into the coming season, Latin American milk production is down, US growth is now down to 1%, and the forecast for Europe is 1.2-1.4% growth higher than last year -- significantly down on the last few years and below global dairy demand growth which is at 2.3%."

Wilson says NZ milk production is expected to come back again; it was about 3% down this year.

"It has been a tough year with facial eczema across much of the country, particularly in the North Island and even parts of the South Island," he says. "Stocking rates are also forecast to be lower this season than they were last season."

Wilson says they anticipate the market will rebalance over the next six to 12 months.

"This [farmgate] forecast of $4.25/kgMS is a conservative view for the year ahead. The reality is that global oil price is low, grain price is low, there is global fragility in financial markets and importantly we still have a stubbornly high US/NZ dollar exchange rate(67.5c at the time of interview). That is having a big impact on our milk price announcement."

But although underlying consumer demand is good, the situation in Russia is not changing and there has been a period of significant supply growth.

"We have inventory levels up reasonably in Europe at the moment but globally we don't see significant buildup in commercial stocks. These are all the factors we look at when we are forecasting, with some caution over the next 15 months."

Fonterra's total focus is how to get increasing volumes of milk into higher value products, he says.

"We are doing that successfully and that will inform the dividend announcement we make at the end of July for the season ahead. Our focus is on total payout to farmers and how we maximise that."

Farmers are resigned to another tight season after Fonterra confirmed its milk price at $4.25/kgMS for the coming season, says Federated Farmers dairy chairman Andrew Hoggard.

"Many were hopeful of a price in the vicinity of $4.50, so optimistic farmers will be feeling disappointed," he says.

"We have seen the opening forecast price change quickly as the market has changed. Unfortunately it has changed for the worse in the previous two seasons. Hopefully with this conservative forecast we won't see any further drops, especially as there are more positive signs out there in the markets presently."

Hoggard welcomes Fonterra bringing forward the advance rate payments, however farmers are still dealing with a low milk price -- below the break-even price for most.

"The DairyNZ economic survey showed that in the 2014-15 season, average farm working expenses were $4.07/kgMS and the breakeven price was $5.77. Figures are still to be crunched for 2015-16 but we can assume the breakeven price is now somewhere in the low-mid $5 range."