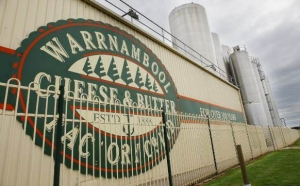 A farmer shareholder at Friday's special meeting asked Fonterra to confirm if it was losing milk suppliers in Australia.

He says western Victoria is a challenge.
Spierings says Fonterra needs more milk in Australia and will be strongly fighting for more milk.

The co-op's new plant at Stanhope is bigger than the one it replaces and will need more milk.

Spierings noted that Fonterra has lowered its farmgate milk price in Australia and this would lead to some suppliers leaving.